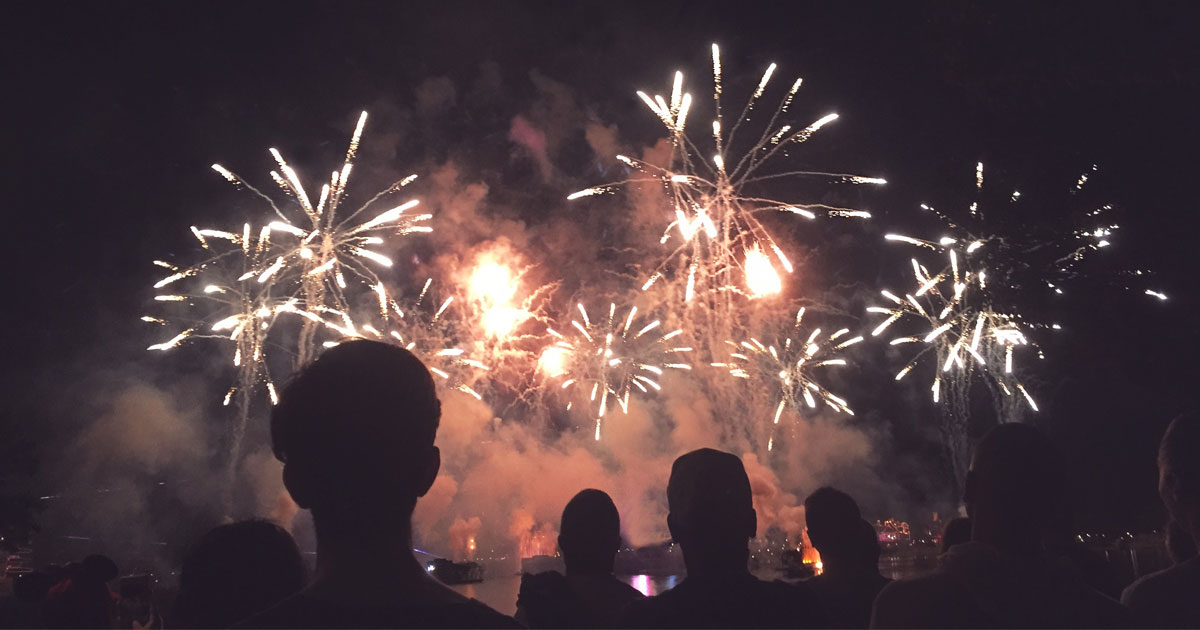 Ole Red’s rockin’ Fourth of July week with the best party in town: Ole Red, White & Blue. When you’re coming to hang out with us, make sure to check out these other festivities happening in town.

Start Independence Day with a bang and end the day with one, too, in a town that sure knows how to celebrate. Gatlinburg kicks off America’s birthday with a spirited parade that begins at the stroke of midnight on July 4. We’ve got the perfect spot to watch from above on our second-floor patio, and we’ll make sure to feed ya at our Midnight Patio Parade Party.

On Fourth of July morning, wrangle the kids and head to the Little Pigeon River for the Gatlinburg River Raft Regatta. Construct and decorate a miniature raft — or rent a rubber duck — and send it down the river in this colorful race. First-, second-, and third-place finishers as well as the most creative floats will receive trophies.

As the sun goes down, settle in on Ole Red’s patio for our Fireworks Viewing Party from a prime spot. Tickets include dinner from a preselected menu and two drinks. The Gatlinburg Fireworks Finale is a not-to-be-missed event.

Music City doesn’t mess around with Fourth of July festivities. Start off your day at the Nashville Hot Chicken Festival, a crowd favorite. To kick things off, a parade of retro fire trucks makes its way along East Nashville’s Woodland Street — convenient for festival patrons whose mouths are on fire after sampling a smorgasbord of Nashville’s finest, hottest chicken. Free samples are handed out to the first 500 attendees. Don’t miss the amateur cooking competition, beer garden, and live music, too.

After grilling out or chilling out poolside in the afternoon, head downtown for all the action. Nashville is home to one of the nation’s largest fireworks displays. But before the fireworks, be surrounded by the sounds of city’s free “Let Freedom Sing!” concert, featuring performances by Brett Eldredge, Mac McAnally, Jessy Wilson, and more.

When it comes time for the main event, there’s no better place to take in the night’s dazzling spectacle than from Broadway’s tallest rooftop bar, The Lookout at Ole Red. Sip on one of our signature party pouches, enjoy festive bites like our Firecracker Dog and Big Bang Pound Cake (topped with moonshine-soaked strawberries and blueberries), and be treated like a rockstar at our Fireworks VIP Viewing Party. If you prefer to pop in as you please when taking in city’s festivities, the first and second floors of Ole Red will be open all day and night, cranking out the live music and food and drinks you love for Ole Red, White & Blue.

You don’t have to stray far from Ole Red to take part in Johnston County’s Red, White & Boom Celebration. It all goes down on Saturday, June 29 starting at 10 a.m. when parade floats make their way along Main Street. It’s a high-stakes competition: Yankee Doodle Traveling Trophies are up for grabs. Once the sun goes down and the stars come out, the town puts on a fireworks display at Tishomingo High School that you won’t want to miss. After fireworks, head back to Ole Red where we’ll keep the party rolling until 10 p.m. at the restaurant and midnight at The Doghouse. We’ll be rocking all kinds of concoctions, including your choice of red, white, or blue sangria.

The reverie continues throughout the holiday week with special outdoor performances at The Park at Ole Red Tishomingo. See Jim Stewart, Ethan Stedman, and Tanner Reed on June 30, July 4, and July 5, respectively. At 8 p.m. on July 5, The Voice finalist and Team Blake contestant Andrew Sevener will appear live in ticketed concert at The Doghouse.