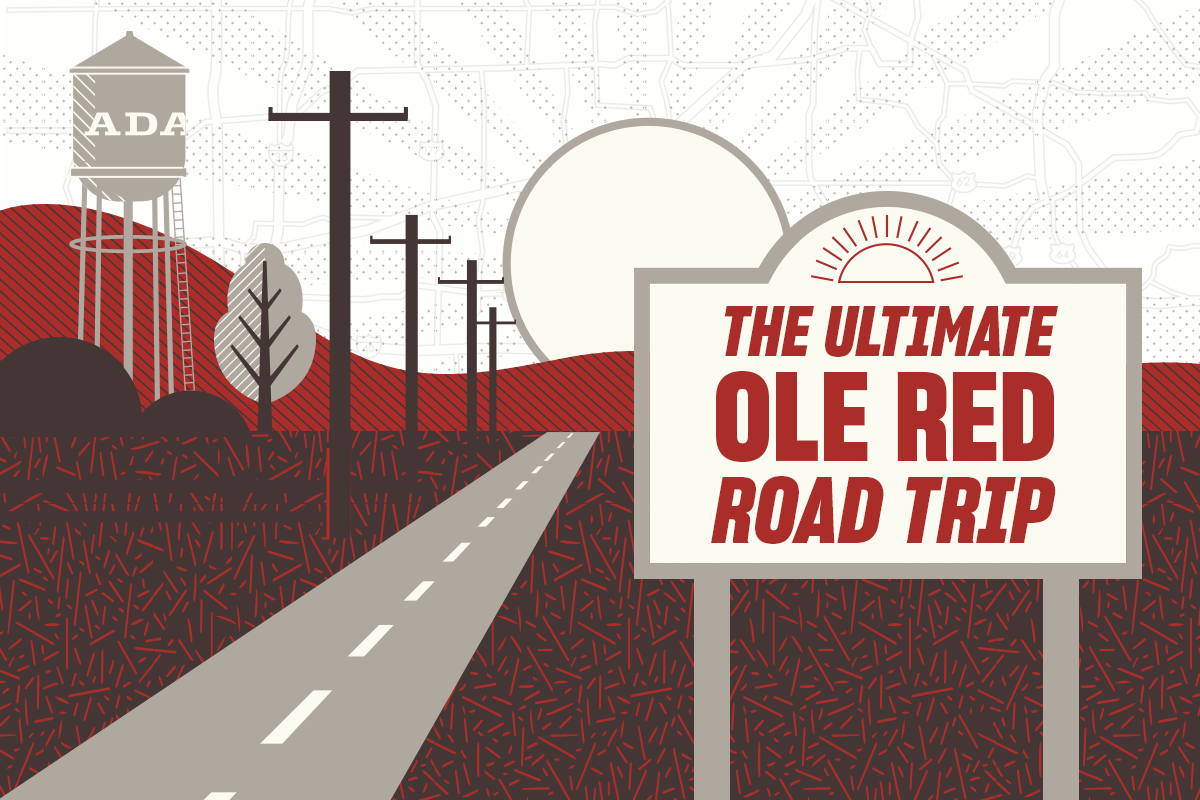 Grab your friends and pile in the car for a road trip that would make any Blake Shelton fan envious.

Start your journey in Tishomingo, OK

First things first: For a small-town stage, Ole Red Tishomingo has seen some pretty big talent walk through its doors. Tishomingo is Blake Shelton’s adopted hometown, making Ole Red his place to play when he’s around. You never know when he might pop in for a surprise performance, but you can always expect a good time with a B.S.-approved cocktail, our signature fried catfish, or a big bowl of brisket and bison chili. If you’re in town on a Thursday, don’t miss our Thursday Night Jams with some of the best live music Texoma has to offer. Once you’ve got your fill to eat, stay a while. Check out Junk Stars — a store owned by Blake Shelton’s mom, Dorothy — where you can find eclectic art made from repurposed materials, like custom leather pieces and wall décor. Wanna get outdoors? The Blue River is where locals go to hike, swim, and fish; and the Tishomingo National Wildlife Refuge is the perfect place to spot wildlife and hunt. Before leaving town, be sure to check out the Chickasaw National Capitol, which houses a museum celebrating the Chickasaw culture that has been rooted in Oklahoma since the mid-1800s.

Does the drive have your dogs barking? Rest a spell. Hot Springs is just the place with its naturally-occurring thermal spring waters. People have been flocking to the area for thousands of years to enjoy the water before it was designated as a reservation in 1832 and a national park in 1921. Buckstaff Bathhouse and Quapaw Baths & Spa are two historical bathhouses that can still be enjoyed by the casual soaker and the seasoned spa-goer alike. If you prefer your suds in a glass, Superior Bathhouse Brewery is definitely your place. Formerly a bathhouse, it was reimagined as a brewery in 2013, the first to ever be located inside of a U.S. national park. Even the beer is brewed using the thermal spring water.

Little Rock is a gem with plenty of surprises in store, including a cool half-million dollars in cold, hard cash that’s up for grabs — sort of. Go on a guided tour of the Arkansas State Capitol, which has served as stand-in for the U.S. Capitol in movies, to do something you’ll probably never be able to do elsewhere: get your picture taken while holding $500,000 worth of $100 bills in your hands. Arkansas tax money is kept in a vault inside the treasurer’s office and is accessible to the public. Don’t worry, they’ll ask for it back. For an extra dose of history, you have your options. Reserve a guided tour of Little Rock Central High School, now a National Historic Site, and learn its importance in the movement to desegregate public schools. The William J. Clinton Presidential Library and Museum offers a glimpse into the life and career of the 42nd president. Those with an interest in maritime history will get a kick out of a trip to the Arkansas Inland Maritime Museum, which is home to the USS Razorback. The submarine was used heavily during World War II and is still operational.

As for restaurants, don’t miss South on Main, which doubles as a listening room that has hosted the likes of Dom Flemons, Parker Millsap, and Rhonda Vincent. The restaurant knows how to dress up down-home classics. Consider yourself extra lucky if you’re there for Sunday brunch. The restaurant is one of only a few in the area that serves a surprisingly hard-to-find Arkansas delicacy: biscuits with chocolate gravy. Rumor has it that the dish was invented in the nearby Ozarks. For something savory — and a good chuckle — dine at Flying Fish, home to what is proclaimed to be the world’s first Billy Bass Adoption Wall. Dozens of plaques featuring everyone’s favorite animatronic singing fish now have a home here. If you donate yours, you’ll receive a free catfish basket.

As you roll into the Birthplace of Rock ‘n’ Roll, make your first stop The Peabody Memphis. This elegant historic hotel has a quirky — err, quacky — history. The Peabody is home to five entertaining ducks that swim in the lobby’s fountain. Get the scoop about this interesting tradition by witnessing the daily Peabody Duck March at 11 a.m. and 5 p.m. — just no huntin’ around these parts. Another famous icon has ties to the Peabody lobby, too: Elvis Presley signed his record deal here. For the grand tour of Presley’s Memphis, fans should add Sun Studios and Graceland to their itinerary. To fully understand the breadth of history contained in this city, visit the National Civil Rights Museum and Stax Museum of American Soul Music, too.

Hungry? Hope you like ribs because ’cue is on the menu in Memphis. Open since 1948, Rendezvous is the yardstick by which all other joints are measured, its origins capturing Southern ingenuity at its finest. When original owner Charlie Vergos wanted to sell ham sandwiches and beer out of a basement, he converted an old coal chute into a meat smoker. Everyone from Justin Timberlake to Princes William and Harry to Peyton Manning have shown up in droves ever since. At Central BBQ, another standout, order a rack of ribs — half wet, half dry. If you get a hankering long after you’ve hit the road for home, the restaurant ships its food anywhere in the United States.

Country icon and Opry member Loretta Lynn has long called Hurricane Mills home, and now you can visit the historic house she lived in for 22 years as well as a replica of her childhood home at Loretta Lynn’s Ranch. Explore her original tour bus and the various museums that are also on the property, including one dedicated to Lynn’s personal memorabilia and awards she’s collected throughout her career. Now onwards to the city that she helped put on the map: Nashville.

Now that you’ve made it to Music City, it’s time to cross Ole Red Nashville off your list. A few things to note about what we like to call our “swanky tonk”: You never know who’s going to show up, we’ve got the tallest rooftop bar on Broadway, and there’s a tractor on the freaking ceiling. Don’t leave without trying a few Nashville specialties, including our Champagne of Fried Chicken and Absolutely Obnoxious Lucky Charms Sundae. Itchin’ for more fun in Nashville? Our friends at the Grand Ole Opry have plenty of suggestions of things to do and see in the city.

We know, we know: By now, you’re ready for Gatlinburg, but before you get there, keep these notable turn-off points in your back pocket. Forty-two miles east of Nashville, Watertown is a popular spot for music video shoots. From Tim McGraw’s “Southern Voice” to Darius Rucker’s “Wagon Wheel,” Watertown has enjoyed its own closeup as its served as the backdrop for music videos. If you feel like catching a double feature, Watertown’s Stardust Drive-In Theatre remains a vestige of the good old days. But if you’re looking for a thrill, Cummins Falls State Park near Cookeville has one of the state’s largest waterfalls. Its basin is a prime watering hole for taking a dip. Just do us a favor and keep your clothes on, buddy — nobody wants to see that.

“Good ol’ Rocky Top,” Knoxville is a charmer with its lively Market Square and passionate base of University of Tennessee fans. The city played host to the 1982 World’s Fair, earning itself its most recognizable landmark: the Sunsphere, which has the appearance of a giant golden disco ball. Something tells us that East Tennessee people sure know how to party. Travel up to the top and explore the city from its enclosed observation deck. For ideal people watching, kick back on one of Market Square’s many restaurant patios. Stuff yourself silly with fried green tomatoes at Tupelo Honey, a bacon burger at Stock & Barrel, or craft beer at Preservation Pub.

You’ve Made It to Gatlinburg!

Whew, let us fix you a drink. How about a Tishomingo Sunset to bring your journey full circle? Everyone can have fun around here — your kids, your grandma, in-laws and outlaws — and maybe misbehave a little, too. We hear that Gatlinburg’s a family tradition — and we’re just so proud to be a part of it. Check out the 10 reasons Ole Red loves Gatlinburg.