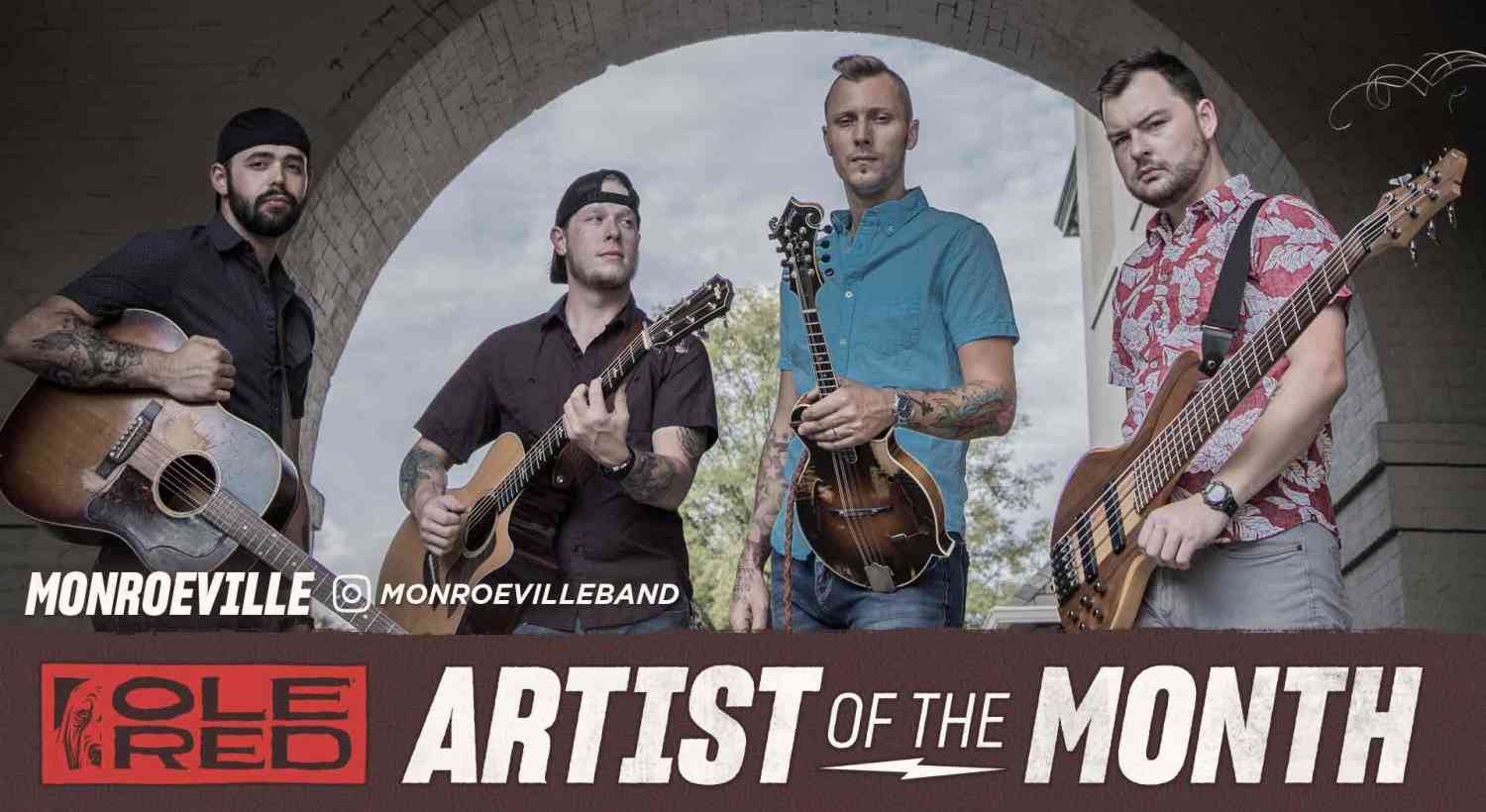 From New Jersey to California there are more than a few Monroevilles dotting the countryside. When it comes to engaging, original, and multi-faceted blends of energetic country, folk, bluegrass, and alternative music, though, no one can doubt that there’s only one Monroeville on the map. Named in honor of legendary bluegrass musician Bill Monroe and fronted by Grammy nominated band leader/owner Matt Munsey, the band also features versatile utility musician McCoy Borg, jack-of-all-songs Chevy Watson on guitar, amazing bassist Paul Watson, and dynamic drummer Evan Pitchers. Monroeville has been playing to growing crowds of fervent fans at popular local venues and at the most prominent bluegrass festivals nationwide. With a live sound so pure, tight, and crisp it sounds like a flawless studio recording, the group continues to rise in popularity and gather devotees from across borders and musical genres.

How is Monroeville achieving it? The answer might lie in a quote by Bill Monroe that the group holds in reverence: “I was determined to carve out a music of my own. I didn’t want to copy anybody.”

“Monroeville is very hard to categorize into a genre,” explains Munsey. “Obviously, we are rooted in bluegrass music, and we love to include it in our sets, but that’s not our only sound. The tribute to Mr. Monroe is because he was an original artist. He created a genre all of his own. He didn’t want to sound like anyone else. That is our mission, too. We have decided to lean our music towards a country sound while maintaining our folk roots and alternative attack. We can play any genre of music and people are impressed most by the sheer level of technicality and musicianship and the variety of sounds the hear from us.”

The band has not only been impressing audiences at shows and festivals; they have recorded and released several albums and singles, as well, including their self-titled debut album Monroeville in 2011, singles “So Far” (2012– the same year Monroeville won the International Bluegrass Music Association’s Momentum Award and  was chosen to sing the national anthem before a sold-out Bristol Speedway and accompanying ESPN television audience), and “Prisoner of War” (2013). These were followed up by the full-length album, Can’t Put Me Out (2014–  a year which also saw their single, “Be Natural,” picked up and distributed by CMT {Country Music Television} ). Their latest, Worlds Apart —an album Munsey describes as ‘experimental’– was released in 2016. Undoubtedly, Monroeville is a band that has seen a great deal of success in a very short time.

It all had to begin somewhere, though. Monroeville’s rise began some place common to just about every band at its inception: lowly obscurity.  Munsey says Monroeville began in 2010 as a side project among the members of Second Wind (the gospel bluegrass band with whom Munsey was involved at the time, the same for whom Munsey engineered and mixed an album, In God’s Time, that received a GRAMMY nod in 2009 in the since-eliminated category of Best Country, Southern, or Bluegrass Gospel Album.) “We –Monroeville– recorded our first project together in Nashville,” says Munsey, “and immediately began touring. When we weren’t on the road we played at Ole Smokey Moonshine in Gatlinburg, Tennessee, a place we still play to this day– four million people visit the place every year; there are thousands of new ears hearing us every day we’re there!”

Munsey says that Monroeville’s lineup eventually went through some personnel changes early on. After only a few years beyond its debut on the music scene, only he remained as one of the band’s original members. But, he says, things have stabilized as of late. “The present lineup has been the same now for between 4 and 7 years,” he explains. “They were all hired by me. Everyone in the band is free to express themselves creatively and they all play at an extremely high level of technicality. We are tight. We think collectively. We can read each other’s minds.”

Munsey says that the band’s creativity and high levels of musical proficiency are at present being primarily focused on one aspect of their music: “Writing, writing and writing,” he explains. “We want to have dozens of songs from which to select our very best material, so we spend a lot of time writing and arranging our material and then recording it. We have been doing this for all of 2019 so far and are getting a lot of stuff ‘in the can’ for us to pick from for our next release. The new music will start coming out this Summer with the full-album to be released in October (2019).”

Beyond 2019, Munsey sees the band building on its present successes to achieve greater accomplishments. “In 5 years, I see Monroeville continuing to work our fan base. We will continue promoting and selling tickets for our own shows in areas that our base is strongest,” he says, adding: “I see us opening for some major touring acts. There’s even a possibility we would be signed (given the right offer was presented) and being promoted by a major label.”

In the meantime, though, he says the band just wants to keep on doing what it does best. Only better. “We are taking time to tighten all the various aspects of our show,” Munsey explains, “Our sets have always been very organic. I almost never make a set list because I like to read the crowd response and feed into the vibe of every show. Lately, we have been focusing on developing a set that we feel would put our best foot forward with any crowd and we can also program our lights and add some ambient tracks. These are the types of details that can take our show to the next level, and we are ready to do that.”

Catch Monroeville at Ole Red Gatlinburg on your next visit!