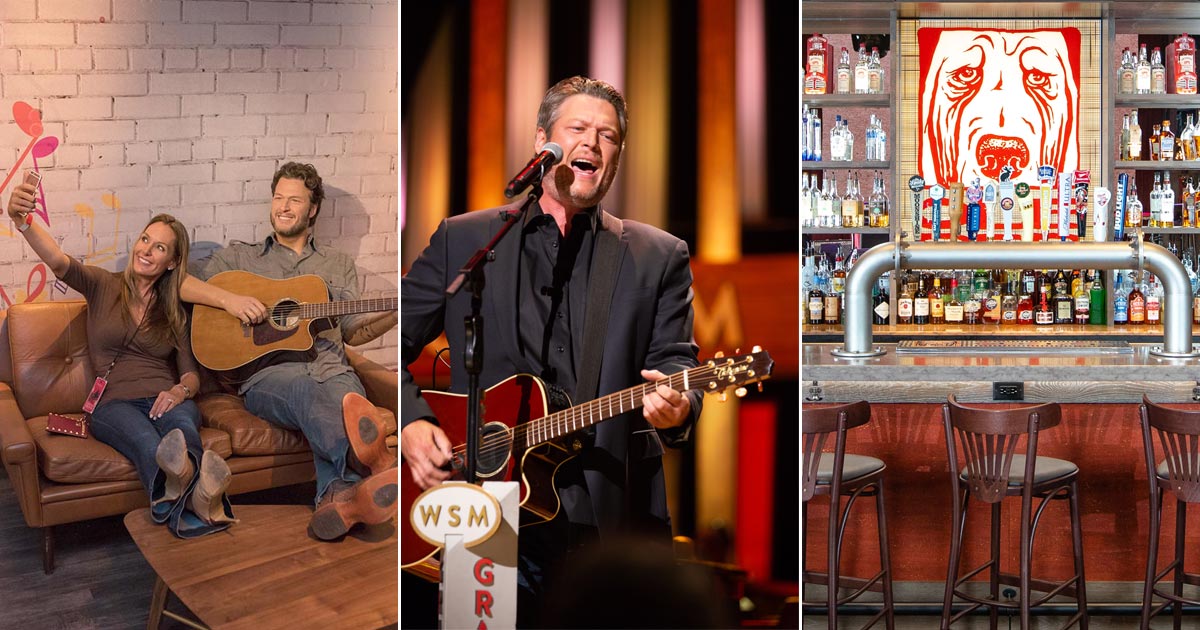 If you love Blake Shelton as much as we do, you’re gonna want to visit these spots in Nashville where the megastar has left his mark. 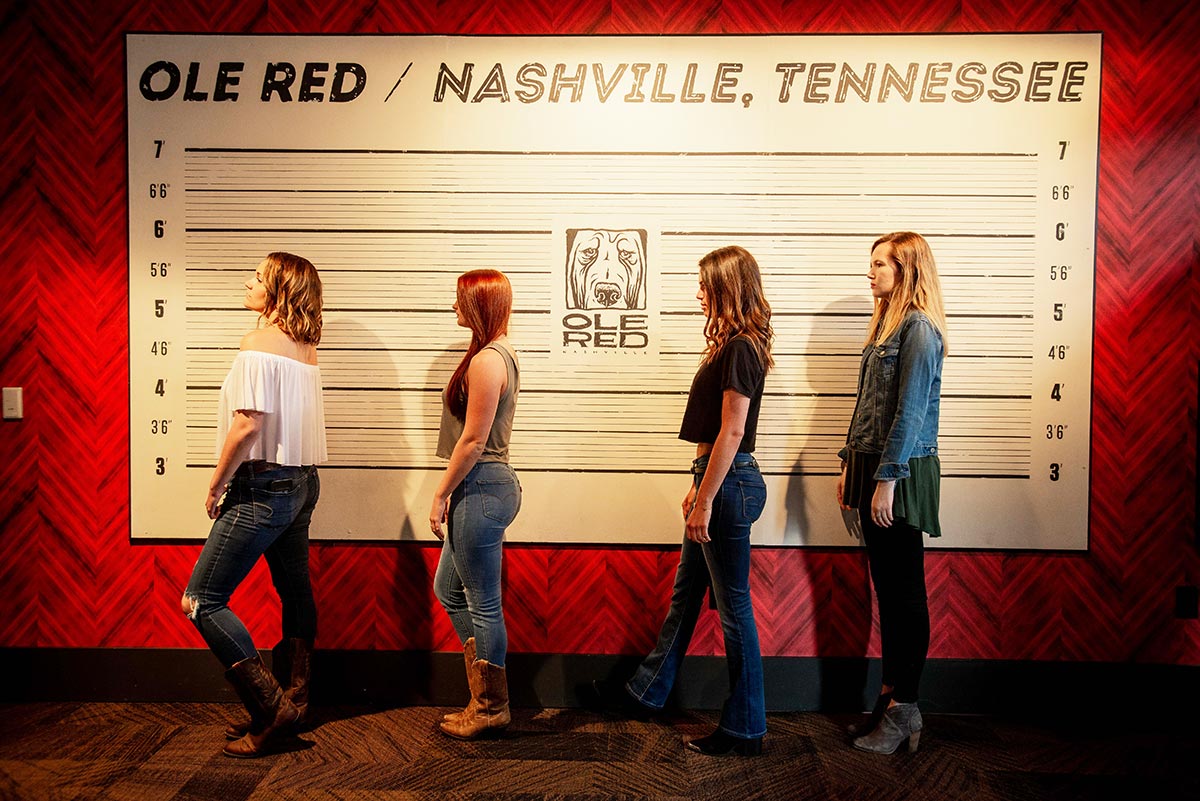 If you’re itchin’ to have a little fun, be sure to stop by our Lower Broadway bar, restaurant, and music venue inspired by Blake Shelton’s hit song “Ol’ Red.” Don’t miss the bottle cap mural depicting our favorite hound, and snap a photo next to the lineup wall.

Come for the B.S.-approved drinks and Redneck Nachos; stay for the good times and great live music. Pro tip: You never know when the man himself may take the stage!

WannaB’s Karaoke Bar is a Nashville staple and an experience like no other. In 2017, Blake teamed up with Smithworks Vodka to host a singing competition at the karaoke hotspot. Today host Hoda Kotb performed her rendition of “Boys ’Round Here” as Blake served as judge. Jump on stage and sing your favorite Blake Shelton song, or channel your inner The Voice coach and enjoy the talent.

Built in 1903 as a church, the structure that sits on the corner of 17th Avenue and McGavock Street was converted into a breathtaking recording studio in the 1960s.

Blake Shelton recorded his 2014 album, Bringing Back the Sunshine, in the space, which is now Southern Ground Nashville. When continuing your cruise along Music Row, don’t forget to keep a look out.

When visiting this treasured local dive bar, you may just run in to some of Nashville’s most talented songwriters, singers, and industry professionals. It’s not unusual to see chart-topping artists or award-winning songwriters take the stage to play a few of their hit songs.

In 2015, Blake Shelton packed Loser’s Bar to celebrate recent No. 1 singles. Songwriters of hits “Doin’ What She Likes,” “My Eyes,” “Neon Light,” “Lonely Eyes,” and “Sangria” each took turns performing on stage. Blake stood back to enjoy the ambience and thank the songwriters for allowing him to record their songs.

Madame Tussauds has a number of locations around the world, but its Nashville wax attraction is the only location that’s completely themed around music, featuring more than 50 wax figures, 30 of which are unique to Music City!

Be sure to check out Madame Tussaud’s “Backstage” exhibit, where you’ll find Blake’s wax lookalike rocking his signature blue jeans, button-down shirt, a pair of cowboy boots (donated by Blake himself!), and a custom-made Takamine P5DC WB guitar. 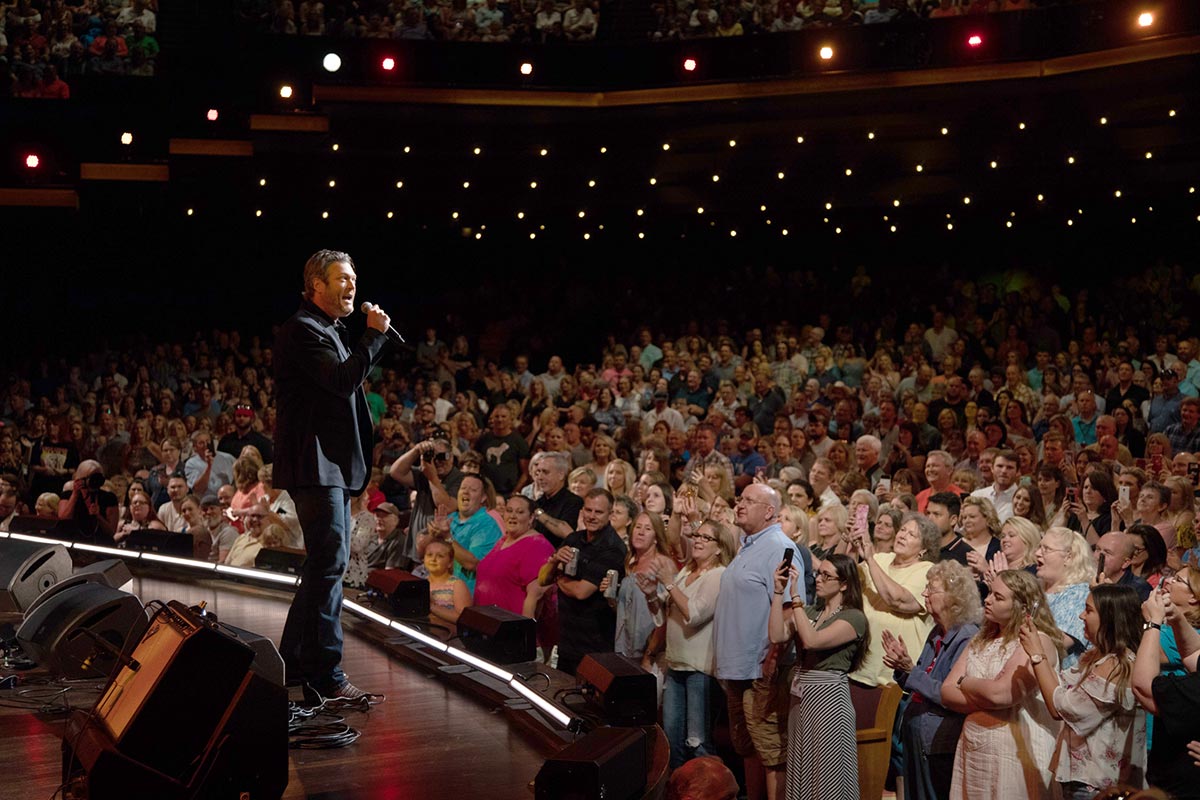 On May 5, 2001, Blake Shelton sang his debut single, “Austin,” during his Grand Ole Opry debut. When describing the experience of standing in the iconic circle, Blake said, “I would have been just as happy to have taken the $20 tour of the building to stand in there. It made me feel like if this thing doesn’t work out, at least I got to sing on the GrandOle Opry.” In 2010, Blake had the honor of officially becoming a member of the Opry, stating, “Tonight is the pinnacle; tonight is the Nashville dream.”

Step into that same hollowed circle of wood on an Opry backstage tour. Dating back to 1925, the Opry is world-famous for its rich history and array of performers taking the stage during weekly shows.