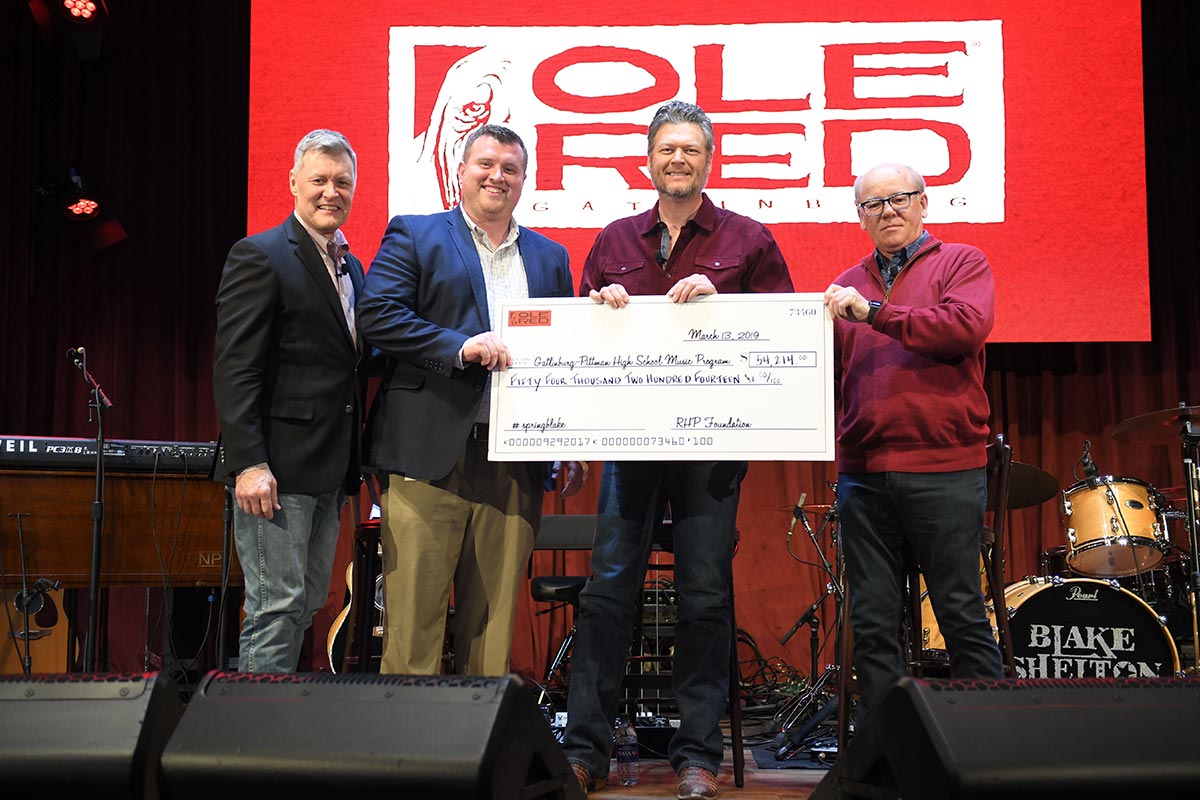 Week-Long “Spring Blake” Festivities Continue Through March 17 with Contests, Giveaways and Performances from Former Contestants on NBC’s “The Voice”

During the press conference a special guest from Gatlinburg-Pittman High School was invited on stage. Shelton and Reed presented the school with a check for $54,214 in support of the local community and music education. The funds were raised by Ole Red Gatlinburg auctioning tickets to tonight’s private Blake Shelton concert with guests the Swon Brothers. The online auction raised a grand total of $29,214 which combined with Ryman Hospitality Properties Foundation’s match of up to $25,000, brought the total to over $50,000 for Gatlinburg-Pittman High School’s music programs.

“When I think of country music and where it started, I think of the mountains of East Tennessee,” Shelton shared with press conference attendees. “I’m so proud to be here and I think this one may be my favorite location because the music is the focal point. The room is almost shaped like a speaker, I love it!”

“Part of our mission as a company is to find and foster the next generation of talent in country music,” said Reed. “Much like we have done with Opry NextStage, we see Ole Red stages across the country as platforms for the next Blake Shelton.”

“Gatlinburg-Pittman High School is extremely grateful to have been selected to receive such a generous donation from the folks at Ole Red,” said Tony Ogle, Principal of Gatlinburg-Pittman High School. “Their commitment to music within our community is definitely showcased by their amazing support of our band and choral programs at GPHS. A huge thank you goes to Mr. Blake Shelton for his personal support of this endeavor, and to Ryman Hospitality Properties for investing in our community and supporting our students.”

Shelton returns to Ole Red tonight for a private concert to officially christen the venue’s stage along with special guests the Swon Brothers. Those who didn’t win a coveted ticket to tonight’s performance can stream a portion of the concert live on Ole Red Gatlinburg’s Facebook page or at Ole Red Tishomingo where the “Spring Blake” party will be in full swing.

The week-long “Spring Blake” fun for the can’t-miss new destination will continue with live music programming through March 17. Beginning Thursday at 11:30 a.m. some of the best bands from Nashville and around the Southeast will perform daily. Ole Red will also be serving up their full, made-from-scratch menu, including signature items, such as the “Champagne of Fried Chicken,” and Gatlinburg-only specialties, like the “Ober Gatlin-burger,” plus Blake-approved cocktails and a great selection of local beers.

March 14-17, Ole Red Gatlinburg will feature a Blake-approved lineup of free performances from former contestants on NBC’s “The Voice.”