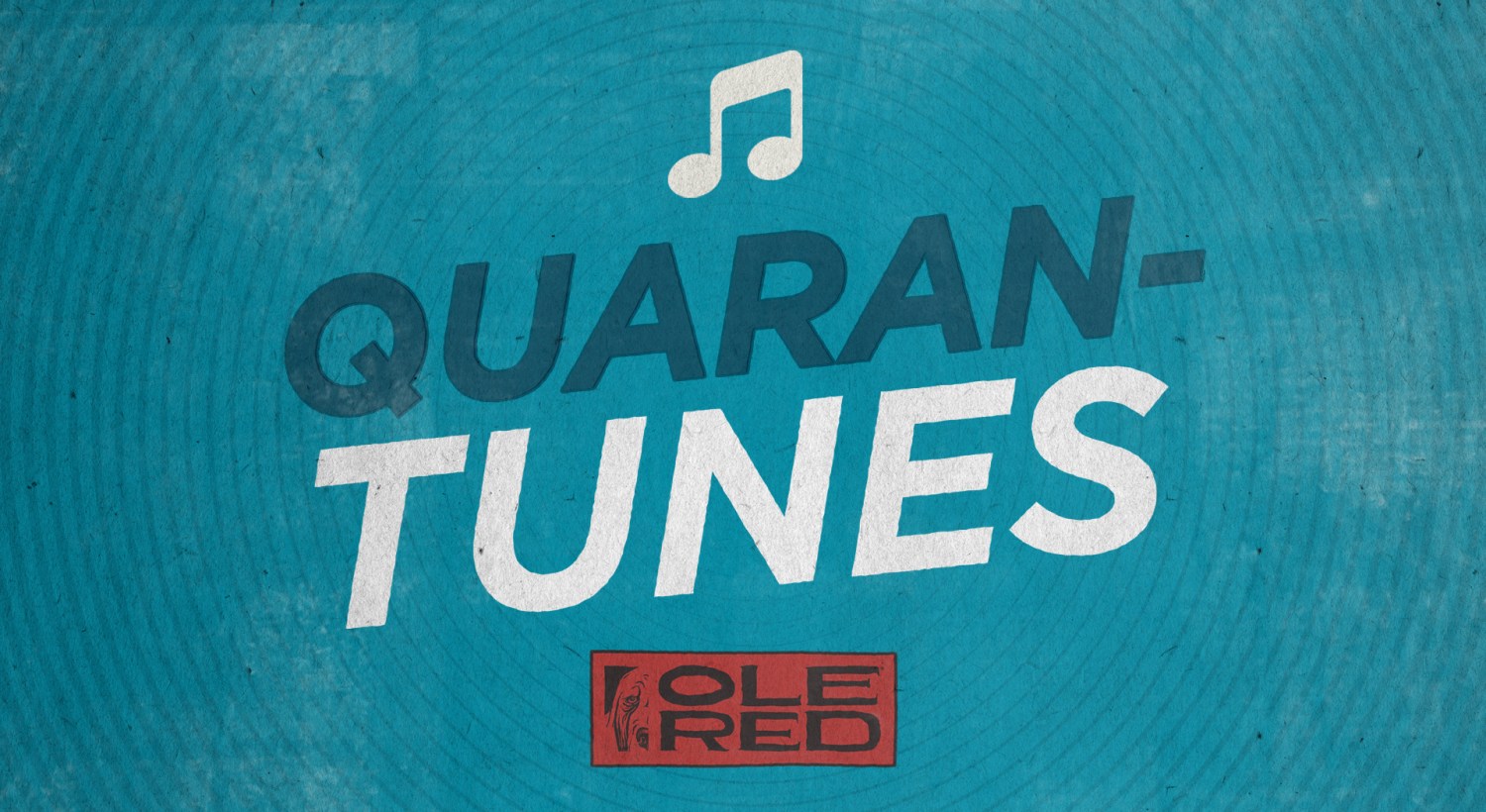 Take a load off your mind and listen to the hottest artists that hit the Ole Red stage.

Are you going crazy in self-isolation? We think it’s the perfect time to discover new music and artists. We’ve put together the perfect quarantine playlist featuring some of our (and your new) favorite Ole Red artists. While you listen to their tunes, be sure to check out a little bit of their stories. Blake got ‘em here one way or another…

If you haven’t caught him on the Ole Red stage, you’ve probably listened to a few of his songs. That’s right – Ray is an artist-songwriter and has co-wrote eight songs on Luke Combs platinum debut album “This Ones For You,” including the #1 single “When It Rains It Pours.” He is our current Neon Light Feature Artist, and “Ghost” is his most recent single.

Fun Fact: Blake Shelton and Ryan are “label mates,” both are signed with Warner Music Nashville. Ryan has played at both Ole Red Gatlinburg and Ole Red Nashville before as a Neon Light Feature Artist. This song is his most recent single inspired by his wife. Don’t you just love, love?

This talented young female artist was asked to make her Grand Ole Opry Debut on the Ole Red Nashville stage last summer. As a singer-songwriter, Anna brings the heart and soul back to Country Music. This is one of our favorite tracks off her EP “The California Kid.”

As another former Neon Light Featured Artist, we’ve been lucky enough to have Hannah grace the stages of both Ole Red Nashville and Ole Red Gatlinburg. If you’re a big fan of 90s country, her music has a way of bringing it back to 2020. Hannah received an invitation to make her Grand Ole Opry debut on the Ole Red stage.

Nobody But You (Acoustic) – Blake Shelton & Gwen Stefani

You can catch this 16-year-old Oklahoma native rockin’ the Ole Red Tishomingo stage on any given Saturday night. Don’t let her age fool you, this girl’s got the heart, sass, and pipes to be the next Carrie Underwood.

Sara has been a long time Ole Red Gatlinburg artist, and one that we’re lucky to have. We had to share her with The Voice this season, but we don’t mind. Until it’s safe to come back in and see her at Ole Red, we recommend replaying her Voice performances. We know we are.

There must be something in the Oklahoma water. Originally an Okie like Blake himself, Zach plays the stage at both Ole Red Nashville and Ole Red Gatlinburg. Raised on Country Music and Jesus, there’s a little something for everyone in Zach’s music. Check out this special tune from his most recent self-titled EP. Here’s to staying undefeated y’all.

Authentic is one of the best words to describe Nick, as an artist and as a person. Formerly an artist of the month at Ole Red Nashville, Nick brings energy and personality to every performance he makes. We bet you’ll have this tune stuck in your head for days.

Rachel is at Ole Red Nashville on a nearly weekly basis. Her smooth vocals are unforgettable and showcased at their best in her single “How Lucky.” If you love it, be sure to check out the music video she just released to go along with it.

You’ll know when JD is in the house at Ole Red Nashville. People travel from far and wide to see this super star, and if you listen to his songs, you’ll understand why. Meet us and JD at the Ole Red Nashville stage when all is safe, you hear?

This guy opened up for Blake Shelton at Ole Red Nashville, and man was it killer! “Dear Love” is his most recent single and showcases his strong vocals and electric guitar riffs.

We’re always ecstatic to have Shaun at Ole Red Gatlinburg. This song seemed fitting for right now… stuck in self-isolation, there are no rules. You can do whatever you want, whenever you want. We’ll leave the interpretation up to you.

Monroeville is truly an Ole Red Gatlinburg favorite. Providing the perfect balance between country and bluegrass, this band sets the mood in the Smokies. Let ‘em set the mood in your living room tonight. Turn on some “Goodbye Caroline” and grab that special someone for a slow dance or two.

Cole’s outlaw country attitude cuts through in every one of his lyrics and guitar licks in this song. You could walk into Ole Red Gatlinburg on any given week, and almost guarantee catchin’ a performance from Cole.

One of the best parts of having your own venue, is getting your friends to play it. One of Blake’s favorites to invite back to the Ole Red Tishomingo stage is Sundance Head. As Season 11 winner of The Voice, Sundance Head brings big time talent to our small town venue.

Blake stole this Okie from Kelly Clarkson on the most recent season of The Voice, and boy are we happy he did. If you haven’t already listened to Gracee, it’s “game over” when you do. We can’t wait to bring this talented local and national talent to Ole Red Tishomingo soon.

Opening up for artists like Keith Urban, Brad Paisley, Eric Church, and Big & Rich, we’re lucky to have Jesse on the stage at Ole Red Nashville. Originally from Canada, Jesse made the trek to Nashville to pursue his dream of becoming a country artist. We think he’s doing pretty darn good so far, but we’ll let his music do the talking.

Anytime we have this classic 90s group at Ole Red Tishomingo, y’all are grabbing your daddy’s money to buy a ticket to see them. No judgement, we understand. But really, this song is a country hit, you probably already know it.

A longtime friend of Blake’s, Rae frequents Ole Reds to play her newest tunes and hang out with the boss. You can always count on Rae to bring the sass and energy to the dullest of times. Her newest single “Keep Up” will bring some excitement to your self-isolation.

As another member of Team Blake alum, Red has been around for many Ole Red “firsts.”  Red is Blake’s buddy and performed this song back at Ole Red Nashville in November 2019. We loved it so much we had to share it. Plus, we know a little something about good country music and cornbread.

Out of Love’s Way – Aly Cutter

There Goes My Heart – Lance and Lea

Y’all know the saying that two is better than one? It’s true. Lance goes with Lea like biscuits go with gravy. You can’t have one without the other. This duo was the Ole Red Nashville artist of the month back in February 2020, and “There Goes My Heart” is one of our favorites from them.

Blake won season 7 of The Voice with Craig, so at this point you already know it’s a no-brainer that he rocks the stage at Ole Red. We’re proud #Yallers! (That’s a hardcore Craig fan.)

New to the Ole Red family, but you wouldn’t know it. Mae says “I write songs and sing ‘em and that’s about all I’ve got figured out.” Let’s just say, she could have fooled us. Her newest single “Recycle” brings you back home within the first 15 seconds.

Down in Nogales – Shannon Raines

We owe a lot the weekend rug cuttin’ at Ole Red Tishomingo to Shannon Raines and his band. There’s not a lot of current artists who can make classic country sound this good.

Here at Ole Red, we have some of our own holiday traditions. One of them is bringing The Swon Brothers to Tishomingo right around thanksgiving. It’s really hard not to be thankful when you’re listening to this duo. Teaming up with country legend Vince Gill on this track is just icing on the cake.

Part time security guard, full-time artist. We like to joke that we’re not sure if Tim actually ever leaves Ole Red Nashville. When this guy isn’t jumping around on stage, he’s at the door keeping y’all safe. This is his newest single, “Burnin’ Gas.”

As an East Tennessee native, Emily Ann is close to Ole Red Gatlinburg, but even closer to our hearts. Too sappy? We’ll stop, but it’s a treat any time this one stops by Ole Red. Another one of Blake’s friends we’re lucky to have.

Off My Chest – Stephen Paul

Stephen is rising quickly in the Nashville music scene and “Off My Chest” is the title track on his latest EP release. We just started having him at Ole Red Nashville, and maybe it’s too soon… but Stephen, we love you. Sorry, we had something to get off our chests too.