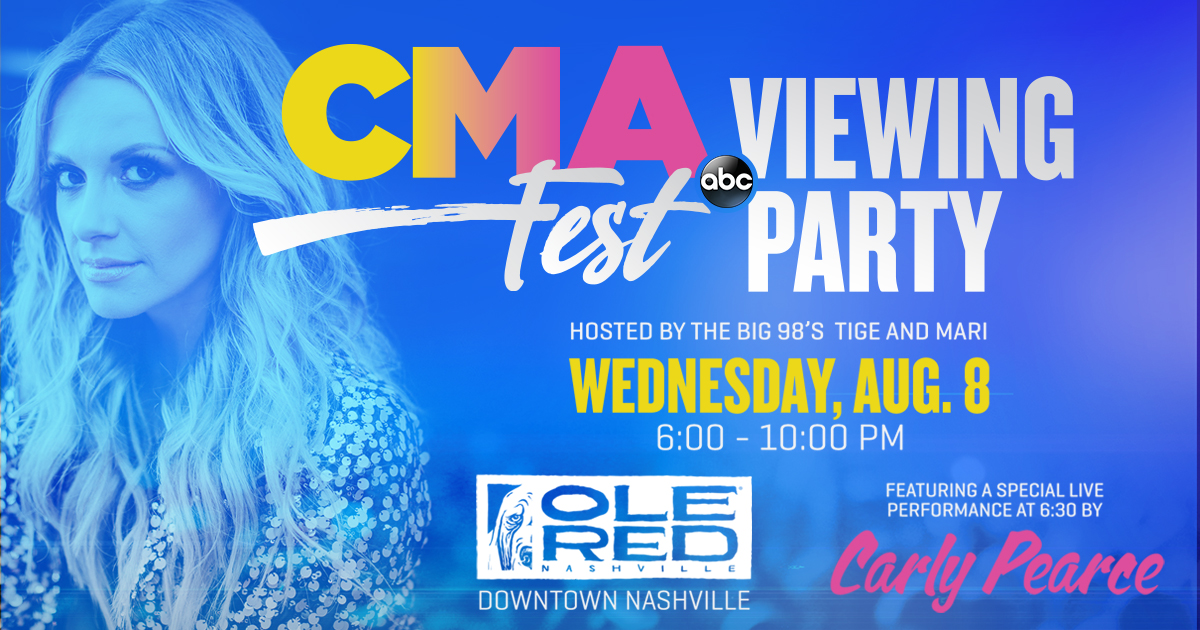 The event, hosted by The BIG 98’s Tige and Mari, will begin at 6 p.m. Big Machine Records recording artist and “country’s ‘it’ girl” (ABC News Radio) Carly Pearce will chat with fans and perform leading into the broadcast, where she makes her CMA Fest main stage debut. Fans at home can livestream the event via Pearce’s Facebook page. There also will be surprise guests and giveaways throughout the evening. The kitchen and bar will also be open with full selection of menu items available for purchase. In typical Ole Red Nashville fashion, you never know who may pop in to say hello or take the stage to perform and as always, live music will continue following the conclusion of the broadcast until 2 a.m. Entry to the watch party is free of charge and all fans are invited to attend.

Filmed during Nashville’s annual CMA Fest (June 7-10, 2018) the unique television special features twenty-nine of country music’s biggest stars and their performances during the four-day event. This year marks the special’s 15th consecutive broadcast, an accomplishment no other music festival has achieved.

About Ole Red
Ole Red is a lifestyle and entertainment brand inspired by Blake Shelton’s clever, irreverent third-chart hit, “Ol’ Red.” You can find Ole Red entertainment venues and products in two locations in the United States by 2018—the flagship multi-story bar, restaurant and entertainment venue in the heart of downtown Nashville’s famed Lower Broadway, and the very first location in Blake’s hometown of Tishomingo, Oklahoma. Ole Red is owned and operated by Ryman Hospitality Properties, Inc. as part of its Opry Entertainment division. For additional information about Ole Red, visit us online at olered.com.

About Blake Shelton
Country Music Association’s 2012 “Entertainer of the Year,” five-time Male Vocalist of the Year winner and GRAMMY nominee Blake Shelton continues to add to his superstar status. In November he released his album Texoma Shore, which became his sixth record to debut at No. 1 on the Billboard Top Country Albums chart and marked his 11th all-genre Top 10. The album has yielded the hit songs “I Lived It” as well as the smash hit “I’ll Name The Dogs,” a romantic tune that boasts over 68 million streams and recently became his 25th No. 1 song. “Turnin’ Me On” is newest single from the album. Texoma Shore follows 2016’s Gold-certified If I’m Honest, the best-selling country album release of the year, which spawned three chart-topping songs and earned him a No. 1 on both the Billboard Top Country Albums and the all-genre Top Album Sales charts.

A member of the Grand Ole Opry, Shelton has earned a host of honors throughout his career including 20 ACM nominations and the Top Country Artist title at the 2017 Billboard Music Awards. As a coach for the Emmy Award-winning television show The Voice, Shelton is a six-time champion, most recently with his contestant Chloe Kohanski. Offstage, Shelton has teamed up with Ryman Hospitality to open a string of Ole Red entertainment restaurant venues, a nod to his 2001 hit of the same name. The flagship location in his Oklahoma hometown, Tishomingo, opened its doors in September 2017, with Nashville’s venue on lower Broadway open now.

About CMA Fest
The Ultimate Country Music Fan Experience™ began in 1972 as Fan Fair®, which drew 5,000 fans to Nashville’s Municipal Auditorium. Having just wrapped its 47th year, the legendary festival has become the city’s signature Country Music event that hosts fans from all 50 states, Puerto Rico and 36 foreign countries. In 2018, CMA Fest featured 11 stages with over 350 acts – all to benefit music education. Since 2006, CMA and the CMA Foundation have invested more than $21 million to sustainable music education initiatives across the U.S. thanks to the fans who attend CMA Fest and the artists who donate their time.

About Carly Pearce
Born into the bluegrass brawn of Kentucky, Carly Pearce has never known a moment that Country music wasn’t her destined path. At the young age of 11 she began touring with a local band, at 16 quit high school for a job performing at Dollywood while being homeschooled and learned humility working odd jobs upon moving to Nashville. Now she’s defying odds with her No. 1 debut “Every Little Thing,” which steered a chart-topping trifecta on SiriusXM’s The Highway that also includes “If My Name Was Whiskey” and “Hide The Wine.” With the Gold-certified title track from her highly-acclaimed debut album EVERY LITTLE THING (Big Machine Records), Carly became the highest charting solo female debut since July 2015 and one of only three to accomplish the feat in 12 years. Aligned with sought-after producer/songwriter busbee (Katy Perry, Keith Urban, Maren Morris, Kelly Clarkson) and regarded as having “the best country debut of 2017” (Uproxx), Carly’s textured vocals and emotive songwriting prowess are emphasized across 13 tracks. Earning her first ACM Awards nomination for New Female Vocalist of the Year in April, Carly won CMT Music Awards’ Breakthrough Video of the Year for “Every Little Thing” and Radio Disney Music Awards’ The Freshest! – Radio Disney Country Best New Artist. Among the many supporters, SiriusXM chose her for their all-genre “Class of 2017,” CMT rallied behind her as a Next Women of Country alum, Pandora featured her as a 2018 Artist to Watch, programmers nationwide voted her into the CRS New Faces Class of 2018 and People deemed her “the new voice of Country” while praise has poured over from media and industry to fans alike. Carly’s sound has always honored the legendary voices before her, evident with over 50 invitations to play the Grand Ole Opry. This year, she holds a coveted slot on four major tours with Blake Shelton, Thomas Rhett, Rascal Flatts and Luke Bryan (including stadium dates). She has previously joined the bill alongside Eric Church, Kelsea Ballerini, Martina McBride, Kip Moore and Brett Young, among others. For tour dates and more, visit CarlyPearce.com and follow along at Facebook, Twitter, and Instagram.