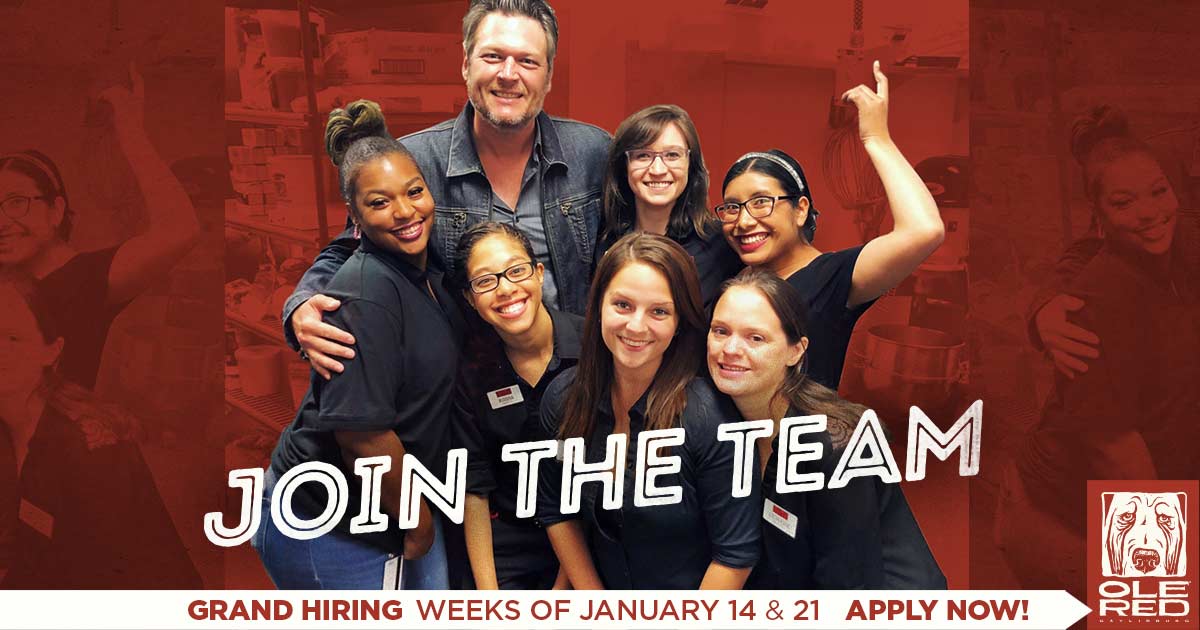 Gatlinburg, Tenn. – Ole Red’s itchin’ to have a little fun in Gatlinburg, Tennessee this year. With a planned spring 2019 grand opening, the team at Ryman Hospitality Properties, Inc. is preparing to open the doors of the bar, restaurant and music venue by filling the property with knowledgeable and professional staff. The company will hold daily job fairs Jan. 14 -21, on site at Ole Red, located at 511 Parkway Gatlinburg, TN 37738.

Organizers are hiring both full-time and part-time positions with an extensive list of benefits that includes paid parking for employees during their shifts, health insurance offerings and eligibility to participate in the company’s 401(k) retirement savings plan.

Ole Red is hiring for a full range of restaurant, bar and retail positions, including server, host/hostess, bartender, prep cook and security. Visit olered.com/jobs for a complete list of positions and to apply for open positions. All candidates are encouraged to apply in advance of the job fair.

Ole Red Gatlinburg is a multi-level, 13,500 square-foot entertainment venue with a two-story bar and restaurant, retail area, performance space, dance floor and exterior terrace. The venue will seat 325 and be open daily, year-round.

The Gatlinburg location of Ole Red follows the opening of Shelton’s original location in his hometown of Tishomingo, Oklahoma (2017) and a second on historic Broadway in downtown Nashville, Tennessee (2018). Ryman Hospitality Properties, Inc. and Shelton are set to bring Ole Red to Orlando, Florida’s ICON Orlando 360 in 2020.

A member of the Grand Ole Opry, Shelton has earned a host of honors throughout his career including 20 ACM nominations and the Top Country Artist title at the 2017 Billboard Music Awards. As a coach for the Emmy Award-winning television show “The Voice“, Shelton is a six-time champion, most recently with his contestant Chloe Kohanski. Off stage, Shelton has teamed up with Ryman Hospitality to open a string of Ole Red entertainment restaurant venues, a nod to his 2001 hit of the same name. The first location in his Oklahoma hometown Tishomingo opened its doors in September 2017,while the space on Nashville’s lower Broadway hosted a week-long grand opening in June of 2018. Locations in Gatlinburg, TN and Orlando, FL are due to follow.