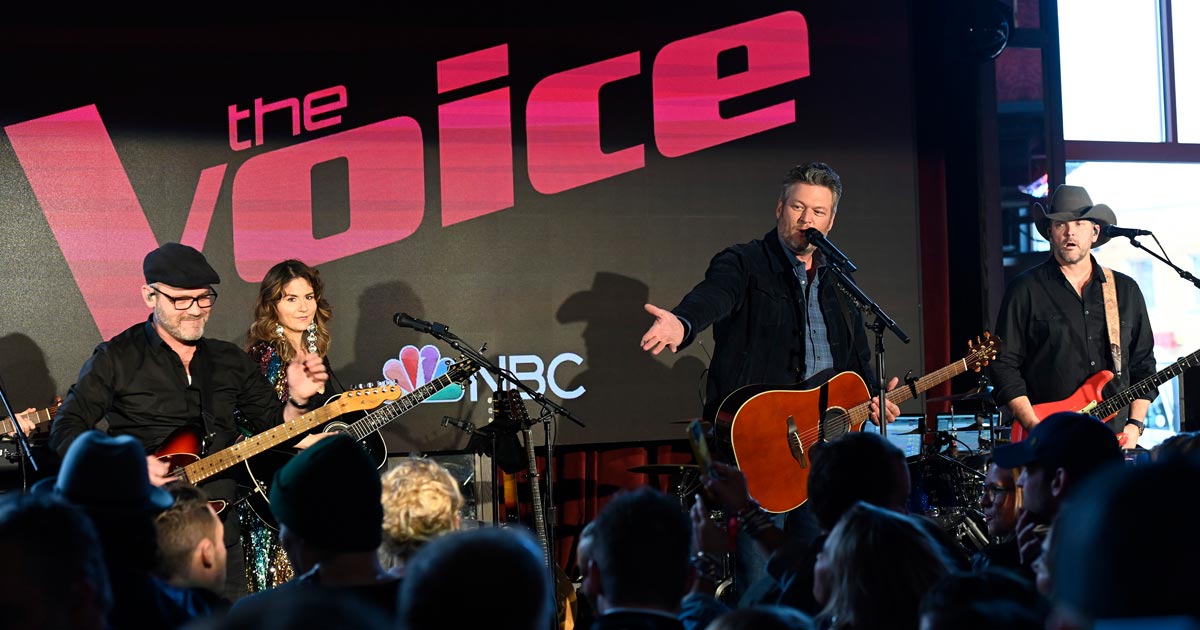 Blake Shelton still remembers what it was like cutting his teeth in Broadway’s honky-tonks and cafés after moving to Nashville in 1994.

When he wasn’t painting houses to pay the bills, Shelton made now-defunct Henry’s Coffeehouse his regular haunt, playing acoustic sets not for tips but for the chance to break through as a country artist.

He also remembers the time he got kicked out of the legendary Tootsie’s Orchid Lounge, after making a habit out of playing a song that was “very inappropriate.”

“So, I decided to put in my own damn bar,” Shelton jokes.

That “damn bar” is Ole Red Nashville, named after his irreverent early hit “Ol’ Red,” which is also a restaurant and music venue.

On November 14, it was the backdrop for an episode of The Voice, the four-time Emmy Award-winning musical competition series for which Shelton is the longest-serving coach. The episode aired tonight on NBC. Find out which Team Blake artists advance to the Top 11 Tuesday night at 8/7c on NBC.

Shelton brought along three Team Blake contestants on this field trip, giving them a peek at what it’s like to forge a successful music career from scratch.

“You can tell it’s just fueling their fire, like That’s what I want to be doing,” Shelton says.

The Voice hopefuls Cali Wilson, Kat Hammock, and Ricky Duran not only watched Shelton perform during a special Ole Red fan event but also got to rehearse in front of their coach on the venue’s stage.

For Duran, the opportunity was a happy coincidence. Hailing from Worcester, Massachusetts, Duran moved to Austin, Texas a year ago to try his hand at the city’s vibrant music scene, making a pit stop at Ole Red Nashville along the way.

“It was literally a year ago today that I was just hanging out in this bar having a drink,” Duran says. “Now to be back a year later and on that stage singing to Blake Shelton at his bar is just so amazing for me.”

A lot can happen in a year.

Fellow contestant Wilson, who has lived in Nashville for three years as a songwriter, says getting an inside look at Shelton’s career has been inspirational, especially since the country star had just won his 10th CMA Award the night prior.

“I think it shows how personal he is as an artist and how much he cares as a coach,” she says.

Since opening in 2018, Ole Red quickly became known as one of the top dogs in the honky-tonk world thanks to its premiere sound system and ample capacity for burgeoning artists to build a fan following. Those details are important to Shelton and haven’t gone unnoticed by former contestants of The Voice.

“Every single time I have been here, somebody from The Voice[’s] past has been on that stage,” Shelton says, citing the likes of Season 10 contestant and Ole Red regular Adam Wakefield.

As the contestant field narrows from 13 to 11 during this week of the competition, Wilson, Hammock, and Duran’s visit to Ole Red is a good reminder that no matter what happens next,  they will always have a stage to play on — just steps away from where Shelton got his start.

“I told the three today that are here, I said ‘This is y’all’s home now, too. There’s always going to be an open door for you here as long as you don’t play that song I played at Tootsie’s,’” Shelton says.