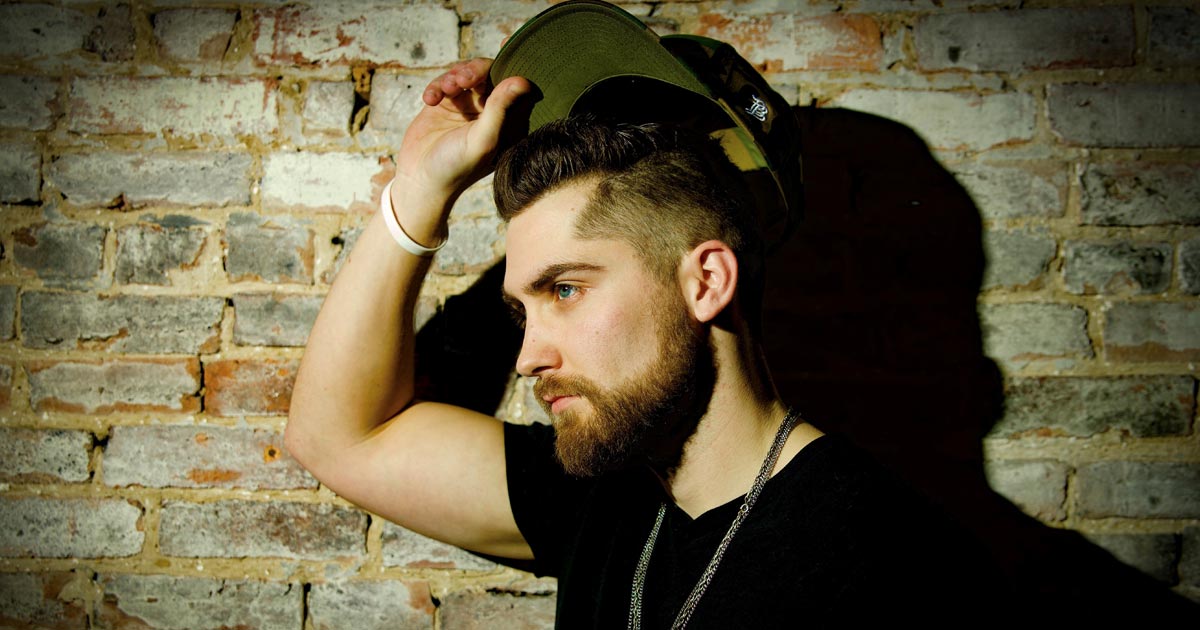 If you’ve been to Ole Red Nashville, chances are you’ve seen Tim Cote. When he’s not performing on stage, he’s working as a security guard for the venue. Get to know this familiar face and see him perform the next time you’re in Nashville.

This interview has been edited and condensed for clarity.

How’d you get into country music?

I’ve been singing all my life and I never really thought of myself being a musician, but I would always go to my local casino, and they would have a bunch of country concerts. My first concert was Brad Paisley, so once I saw his concert, I was like Oh, I really like this. This is pretty cool. My dad always used to listen to the old school country, and I never really liked it at first, but then it started growing on me.

Who are your biggest influences?

Right now, my big influences are guys like Dustin Lynch, Florida Georgia Line — that’s kind of where my style lies, in between them. I do some Jake Owen, Luke Bryan every once and a while. It changes with the times, like right now, Morgan Wallen is coming around the corner. It sparks different interests and makes me want to pursue different styles in my writing and whatnot.

You got your start touring with a couple of different bands in New England. How’d you make the move from your home state of Connecticut down to Nashville?

After that, I [realized] I need to do something bigger with my career. I know I want to get into the business, and I’ve got to make the move, so I picked a date on my calendar and told my girlfriend — now my fiancée — and said, “We got to go. Let’s pick a date and we’re going to just go.” We picked a date and we moved down to Nashville in October of 2017.

I started playing shows right around then doing acoustic solos and got in at Nashville Underground, which was just opening at the time. The guy who produced my EP was actually working down there [and invited me to come play acoustics] so I started doing that. When Ole Red opened, I got hired doing security.

They weren’t hiring employees to perform at first, but eventually I sent them my stuff. They gave me chance to start doing acoustics down there and I finally made my way up to doing the late night with a full band, and ever since they’ve loved it. I’m playing almost every weekend now, which is pretty cool and the greatest opportunity because Ole Red is awesome for the music scene, just in the way the portray the artists and they want to put you first.

It’s just been a blessing. It was less than a year since I moved to actually get that opportunity to do that, and now I’m doing it strong for almost two years now. Definitely the opportunities that building gave me not only as a security guard but also as a musician have been so humbling to me.

In 2015, you got the opportunity to do a blind audition for The Voice in front of Blake Shelton and the rest of the show’s judges. What is it like to now be a regular performer at Blake Shelton’s own entertainment venue, Ole Red?

It’s pretty cool to think about it. I didn’t get further in the competition and was 22 at the time, so it was a little heartbreaking, but I definitely went home and tried my best to get better. Once I moved to Nashville, just being able to play Ole Red is a blessing. To think that Blake Shelton was the key behind that bar, it brings the whole circle of my story back around.

When you’re not performing on the Ole Red Nashville stage, you’re working as a security guard for the venue. What’s that like?

Sometimes I’m at the door. Sometimes I’m just floating around. It’s definitely a different experience because when I’m doing security, I’m mostly wearing my glasses. It’s pretty cool because it’s like I’m going undercover from performing. Some people come in and they notice me and say, “Hey, weren’t you performing here on Friday night?” I kind of joke with them and say, “No, you’ve got the wrong person.”

It’s cool how people are coming into Ole Red days later and they’re remembering my face and my performance … I’m just a boy trying to make it in this town. I think I’m just as good as anybody else, but there’s so much talent here on Broadway. People are coming up to me after a show saying, “Hey, you’ve killed it and you’re by far the best artist on Broadway that I’ve heard this weekend.” I’m so humbled to hear that. I just came down here to do my thing, and I’m seeing now that it’s paying off … That one venue has created tons of blessings for me, and I’ve got to thank God for that. It’s crazy to think that it’s possible.

What’s been the coolest moment of your career so far?

Getting the opportunity on The Voice and just being able to learn from that experience. Even though I didn’t go too far with it, I was able to work harder to get better and finally make the move to Nashville. Now I’m playing consistently in front of people that are coming into town, new faces every day. I get to say that’s my new steppingstone, and I’m just excited to see where the next level takes me. Hopefully I’ll get to travel a little more this year and see the people out where they live. Now that I’ve hit this mark, what can I do next?