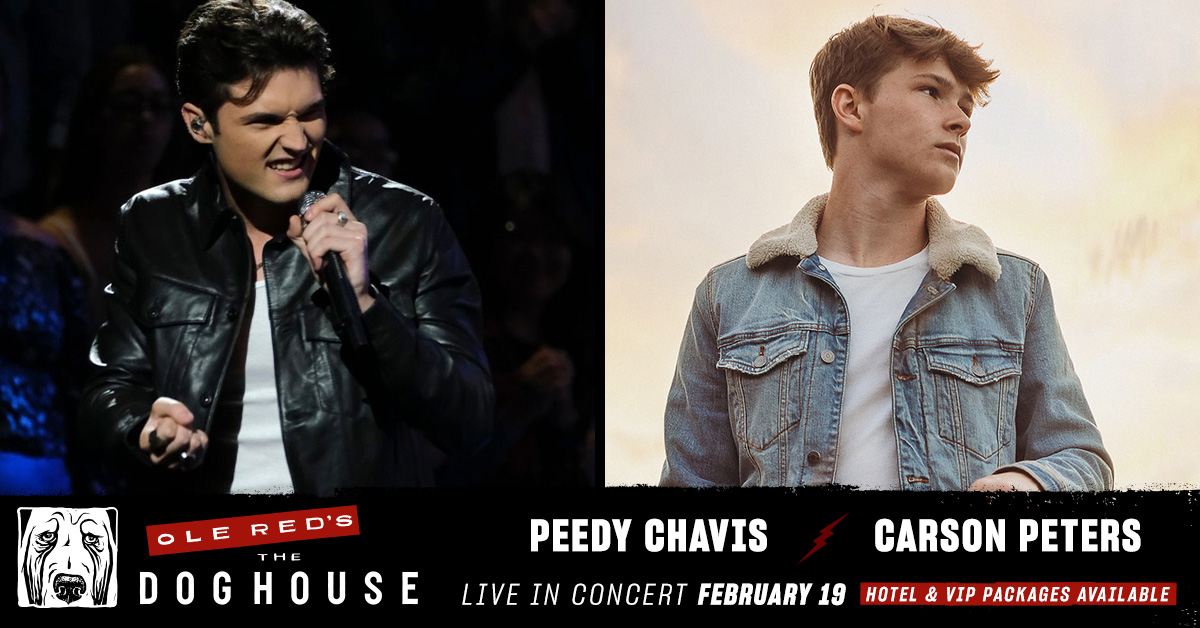 We’re bringing Voice artists Peedy Chavis and Carson Peters to The Doghouse at Ole Red Tishomingo! If you loved them performing on Team Blake, you’re not going to want to miss this!

Team Blake Voice artist Peedy Chavis doesn’t remember a time when he wasn’t obsessed with Elvis Presley. His mother started playing Elvis songs for him at 3 years old and he went on to dress as Elvis for Halloween 10 years in a row. In high school, Peedy joined musical theater and knew he was a natural entertainer. He often landed the lead roles and proceeded to compete in theater competitions throughout his school years. Outside of theater, Peedy remained on stage by gigging locally with his rock band. Peedy hopes to inspire the younger generation with his modern spin on old school rock ‘n’ roll.

It’s no surprise Blake Shelton was the first judge to turn his chair for the young artist!

Joining Peedy from Team Blake is Carson Peters. Carson started playing the fiddle at just 3 years old and began performing at 4. He quickly became a local sensation and gained national attention after performing on “The Tonight Show with Jay Leno” at 8 years old. He put his fiddle skills to work and started playing in bands, one of which opened for his idol, Ricky Skaggs. At 10 years old, Carson’s dreams were coming true and he got invited to perform with Skaggs at the Grand Ole Opry. Despite his success and love for the fiddle, Carson decided to make a name for himself as a singer as well and started his own bluegrass band. Outside of school, Carson has spent the past five years touring all over the U.S. as the lead singer in his band.

Don’t miss this Voice AND Team Blake reunion of these rising stars at Ole Red Tishomingo!

Get the true “I’m with the band” experience at The Doghouse with our VIP Pass that gives you the star treatment at Ole Red. Start your night with a concierge greeting and escort to The Doghouse before you settle in with KKAJ DJ Mike Elroy and opening artists with drinks and a private dining buffet. Then, enjoy an intimate meet and greet, and exclusive performance with Pete Mroz & The Joy Reunion, all before the show begins.

-Concierge greeting and escort from Ole Red to The Doghouse

-Exclusive and intimate performance from Peedy Chavis and Carson Peters

-Meet & greet and photo-op with Peedy Chavis and Carson Peters