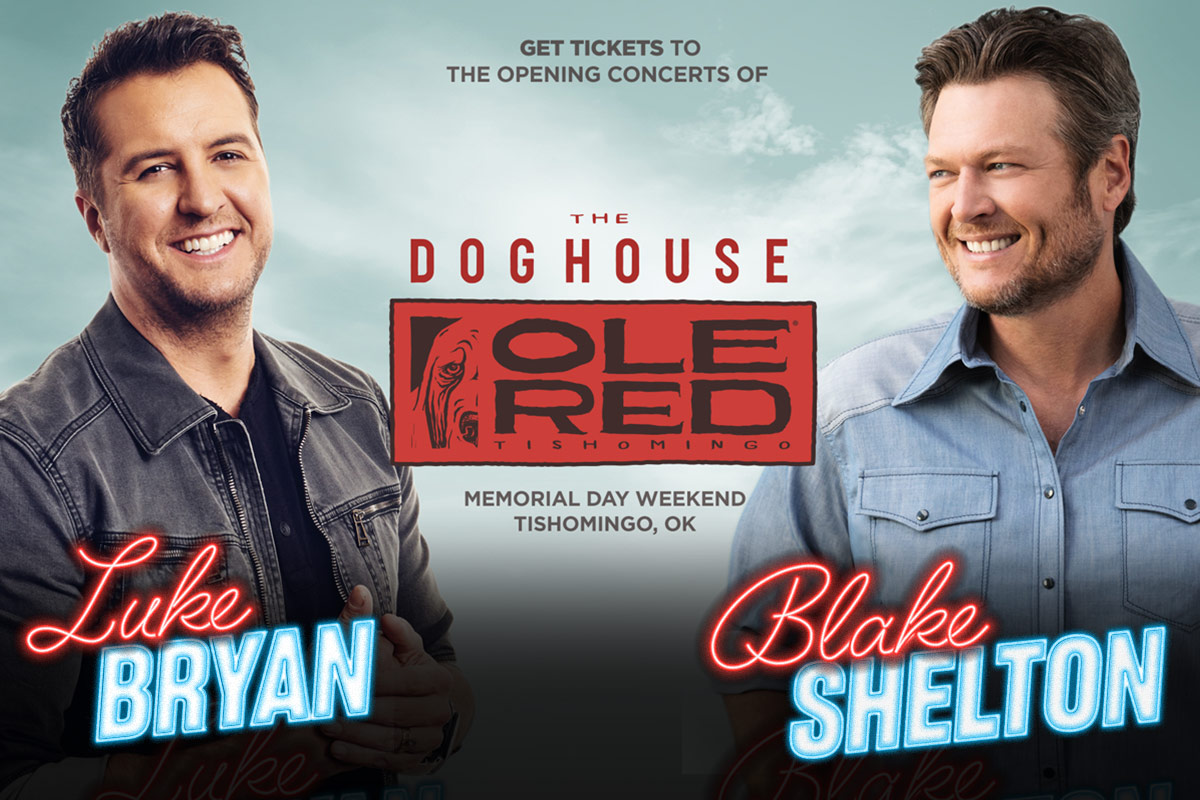 TISHOMINGO, Okla. — Ryman Hospitality Properties (RHP) and Blake Shelton are giving fans a reason to have a little more fun in Tishomingo. The town will soon be home to The Doghouse at Ole Red Tishomingo, a music hall and events venue expansion to the Shelton- inspired bar and restaurant located in downtown Tishomingo.

The Doghouse at Ole Red Tishomingo’s weekly programming will include “Thursday Night Jams,” “Live in Concert” on Friday nights, the “Shindig,” weekly dance party on Saturday nights, and more to be announced throughout the year. The space will also be available for private events beginning in June.

In true Ole Red fashion, The Doghouse will celebrate its grand opening May 23-26 with a weekend of unforgettable entertainment.

“We are grateful for Blake’s long-standing support of wildlife conservation in Oklahoma,” said Richard Hatcher, board of directors president for the Oklahoma Wildlife Conservation Foundation. “To be able to break in The Doghouse with these events is just icing on the cake.”

“It’s unreal to me that a spot like The Doghouse exists in Tishomingo,” said Shelton. “Growing up, if I wasn’t outdoors hunting or fishing, I was looking for a stage to play music. The Doghouse is going to be the best place to see all the great talent that exists in this part of the country. I’m excited to get the party started with my friend Luke and support a cause that’s so close to my heart.”

“I know how special this place is to Blake and something he has wanted to do for a long time,” said Bryan. “I am honored to come open the doors and kick this off for him.”

Multiple Chances to Win Tickets
One lucky fan and a guest will have the opportunity see both Luke Bryan and Blake Shelton take the stage during the grand opening celebrations. Fans can visit olered.com/doghouse and enter now through May 17, 2019 for a chance to win.

Fans in the region can listen for a chance to win tickets to either the Luke Bryan or Blake Shelton concerts on local radio.

Johnston County residents will have a very-special “locals only” opportunity to win tickets in the week leading up to grand opening. Follow Ole Red Tishomingo on social media for more details.

About Ole Red
Ole Red is a lifestyle and entertainment brand inspired by Blake Shelton’s clever, irreverent third-chart hit, “Ol’ Red.” You can currently find Ole Red entertainment venues and products in three locations in the United States, the flagship multi-story bar, restaurant and entertainment venue in the heart of downtown Nashville’s famed Lower Broadway, the very first location in Blake’s hometown of Tishomingo, Oklahoma and a newly opened location in Gatlinburg, Tenn. The company has announced an additional location opening in Orlando, Florida in 2020. Ole Red is owned and operated by Ryman Hospitality Properties, Inc. as part of its Opry Entertainment division. For additional information about Ole Red, visit us online at olered.com.

About Luke Bryan
Luke is a two-time Academy of Country Music and a two-time Country Music Association Entertainer of the Year, a five-time host of the ACM Awards, a NSAI Artist/Songwriter of the Year and was named a CMT Artist of the Year six consecutive years. Luke has more certified digital singles than any other country artist with 46 million tracks and 12 million albums with four Billion music streams. Luke has placed 22 singles at #1, 12 of which he co-wrote. Over the last few years, Luke’s headline tours have performed for 1.5 million fans or more and in 2018 he performed more stadium dates in one calendar year than ever with a career total of 34. On May 31, Luke will launch the “Sunset Repeat Tour” with special guests Cole Swindell and Jon Langston.

Luke debuted his new single “Knockin’ Boots” on the 54th Academy of Country Music Awards this spring where he was nominated as Entertainer of the Year and in the Song of the Year category for his poignant “Most People Are Good.”

In the summer of 2018, Luke opened Nashville’s only six-floor entertainment facility in the heart of Music City, LUKE’S 32 BRIDGE FOOD + DRINK. The name was inspired by Luke’s childhood home near Route 32 Bridge in Lee County, Georgia.

About Blake Shelton
Country Music Association’s 2012 “Entertainer of the Year,” five-time Male Vocalist of the Year winner and GRAMMY nominee Blake Shelton continues to add to his superstar status. His current single “God’s Country” shot to No. 1 on the iTunes chart upon release and remained Top 3 for three weeks and counting. Already approaching 10 million streams, the “southern-rockin’ country stomper” (Rolling Stone) had its national television debut on the 54th ACM Awards. Earlier this year Shelton shared music new and old across the nation on his “Friends & Heroes 2019” tour. The arena run sold out all 18 dates, returning to the Hot Tours Top 5 chart (Billboard), and was one of the only nine country tours to make Pollstar’s Top 100 Tours in Q1 list.

A member of the Grand Ole Opry, the Platinum-selling entertainer has earned a host of honors throughout his career including 20 ACM nominations and both the male and overall Video of the Year trophies at the 2018 CMT Awards. As a coach for the Emmy Award-winning television show The Voice, Shelton is a six-time champion, most recently with his contestant Chloe Kohanski. He lends his “voice” to the character Ox, the unofficial Mayor of Uglytown in the upcoming UglyDolls movie. The animated feature will be released May 3. Off stage, he has teamed up with Ryman Hospitality to open a string of Ole Red entertainment restaurant venues, a nod to his 2001 hit of the same name, in his Oklahoma hometown of Tishomingo as well as Nashville and most recently in Gatlinburg, TN.

Shelton’s most recent album Texoma Shore became his sixth record to debut at No. 1 on the Billboard Top Country Albums chart and marked his 11th all-genre Top 10. Texoma Shorefeatures tracks including the GRAMMY-nominated “I Lived It” and the Gold-certified “I’ll Name The Dogs,” a romantic tune that boasts more than 143 million streams and marked his 25thNo. 1 song. In the week following album launch, Shelton became the first artist in Country Aircheck / Mediabase history to have six songs chart simultaneously. For more information and upcoming tour dates, please visit www.BlakeShelton.com and follow Blake on Twitter @BlakeShelton.