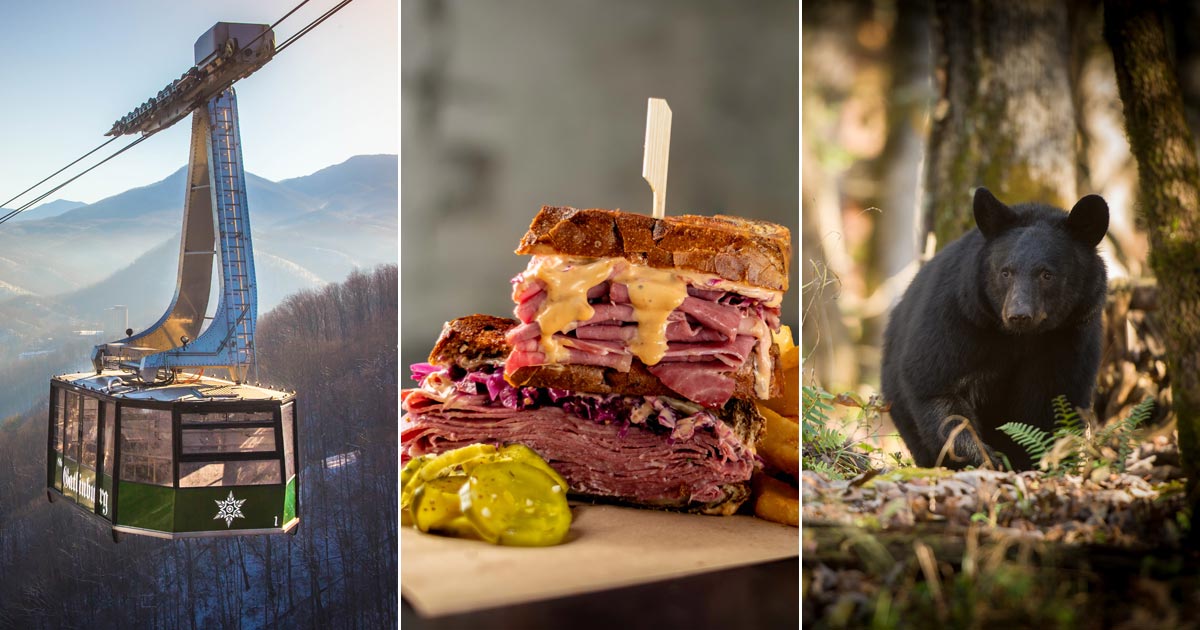 We dish on where to cut loose, chow down, and get a little wild in the Smokies. Your best Gatlinburg vacation — unleashed.

At Ole Red, “getting wild” means ordering two rounds of Redneck Nachos and dancing to live music when you know everybody is watching. In the Smokies, wild looks more like up-close encounters with black bears and a summit up one of Tennessee’s tallest peaks. Both definitions have their place in Gatlinburg.

To work up an appetite for all those nachos you’ll eat later, we recommend hitting the trails. Gatlinburg’s got several just on the outskirts of town proper. (It’s just one of many reasons why Ole Red loves Gatlinburg.)

Gatlinburg Trail is a flat, 1.9-mile trail with views of the Little Pigeon River — and fortunately for us, dogs are allowed, too. Along your walk, you can spot foundations and chimneys of old homesites. Give your ticker a workout by hiking Mount LeConte, which is the highest peak completely within the state of Tennessee. Multiple trails ascend the mountain, so choose your own adventure — and get treated to panoramic views once you’re at the top.

If you’d rather have your truck do all the work, pile on in. Plenty of the Smokies’ natural wonders are just a short drive away. About an hour from Gatlinburg, Cades Cove is known as one of the best spots to catch a glimpse of wild black bears in the national park, particularly at dawn and dusk. Just bring your binoculars and drive the 11-mile loop. While you’re on an exploration kick, go chase a few waterfalls. Grotto Falls, Laurel Falls, and Cataract Falls are all close to town.

Don’t get us wrong: We’ll gladly have ya over for any and every meal during your trip — come back again and again for the Turtle Funnel Cake, we won’t tell — but make sure to check out some other sweet spots in town to chow down.

If you don’t start your day in Gatlinburg with pancakes or doughnuts, you’re doing it wrong because:

Pancake Pantry opened as the state’s first pancake house in 1960, so you know they’ve got to be doing something right. Homemade whipped cream and butter? It doesn’t get much better. If you’re sticking to a well-rounded diet, The Donut Friar will do the trick. It doesn’t take long after its 5 a.m. open time for folks to start pouring in to get their fill of all things fried and glazed.

Just outside the national park, Old Dad’s has got your sustenance and then some. Chow down on a breakfast sandwich before a hike, or swing by at lunch for an honest-to-goodness fried bologna sandwich. A Gatlinburg institution, the general store is also stocked with barrels of the candy you grew up on.

Off the beaten path, The Wild Plum Tea Room is an escape, serving tried-and-true family recipes and the plum tea that made the place famous, which they serve warm or chilled. If not for the tea and chicken salad, go for the atmosphere. Rustic and quaint, there’s no bad spot in this place, but we opt for the enclosed patio on a sunny afternoon.

You Never Know What You’ll Find

Gatlinburg’s got some real gems you can’t see anywhere else in the world. For one thing: the world’s only museum dedicated to salt and pepper shakers. With a collection that’s more than three decades in the making, The Salt and Pepper Shaker Museum houses over 20,000 unique sets of shakers. Just goes to show that variety really is the spice of life.

A new museum in town specializes in an arcade classic: the iconic pinball machine. Gatlinburg Pinball Museum has a collection of vintage and rare pinball machines themed around anything from Aerosmith to The Addams Family that you can play all you want for just a few bucks.

Floor to ceiling, Ripley’s Believe It or Not! Odditorium contains a treasure trove of head-scratching artifacts, like “The Last Supper” recreated with dryer lint and a replica of Hogwarts made from more than 500,000 matchsticks. Created in the spirit of Robert Ripley who traveled to over 200 countries in search of the world’s most unusual and odd artifacts, Ripley’s Odditorium lives up to its name as “the weirdest place in Gatlinburg” — sounds like our 3 a.m. tweets would fit right in.

Looking for a good laugh? Sweet Fanny Adams Theatre has got you covered with its host of outrageous musical comedies. The theater is just around the corner from us, so once you get a bellyful of Ole Red’s biscuits, enjoy a week’s worth of belly laughs courtesy of Sweet Fanny Adams.

You can’t leave Gatlinburg without picking up some mementos for the road, especially Ole Red t-shirts for you and your favorite Blake fan back home — they’ll be mad as hell if you don’t get them something.

Gatlinburg’s also got some true artisans. The Great Smoky Arts & Crafts Community comprises more than 100 independent artists and craftsman in an 8-mile loop on U.S. Route 441. Don’t miss Ogle’s Broom Shop, which has been owned by three generations of broom makers. These brooms aren’t for sweeping — they’re custom works of art.

You won’t leave empty-handed at Smoky Mountain Farms Jelly House, which sells over 80 different flavors of jam. (Hello, moonshine jelly!) Moonshine is a big export around these parts. Speaking of, Ole Smoky Moonshine is the most visited distillery in the world. From mango-habanero to cookies-and-cream, Ole Smoky doesn’t play around in the flavor department. Go on and pass that jar.

Hope you’re not scared of heights because Gatlinburg’s got a lot of them. Whether you’re riding to the top of the Gatlinburg Space Needle, zooming through the forest on the Gatlinburg Mountain Coaster, or taking a journey on an open-air chairlift at Gatlinburg SkyLift Park, you’ll learn that this town doesn’t have a bad angle.

You can make a day out of either of Gatlinburg’s amusement parks. Anakeesta packs some big thrills into its theme park in the sky, including the tree canopy walk, dueling zip lines, and a single-rail mountain coaster that lets you control your own speed, whether that means full-throttle or slow-and-steady. If you prefer the latter, you’ll love the opportunity just to take in the views of Mt. LeConte while enjoying ice cream from Pearl’s Pie in the Sky. Ober Gatlinburg supplies year-round fun as a skiing, snowboarding, and tubing hotspot in the winter and as one of the best places to cool off in the summer with three water rides, an aerial tram, and more.

If you prefer getting soaked to soaring in the sky, hop in the raft and tackle some rapids on a whitewater excursion led by Smoky Mountain Outdoors or Rafting in the Smokies. Both offer adventures just about an hour’s drive from Gatlinburg.