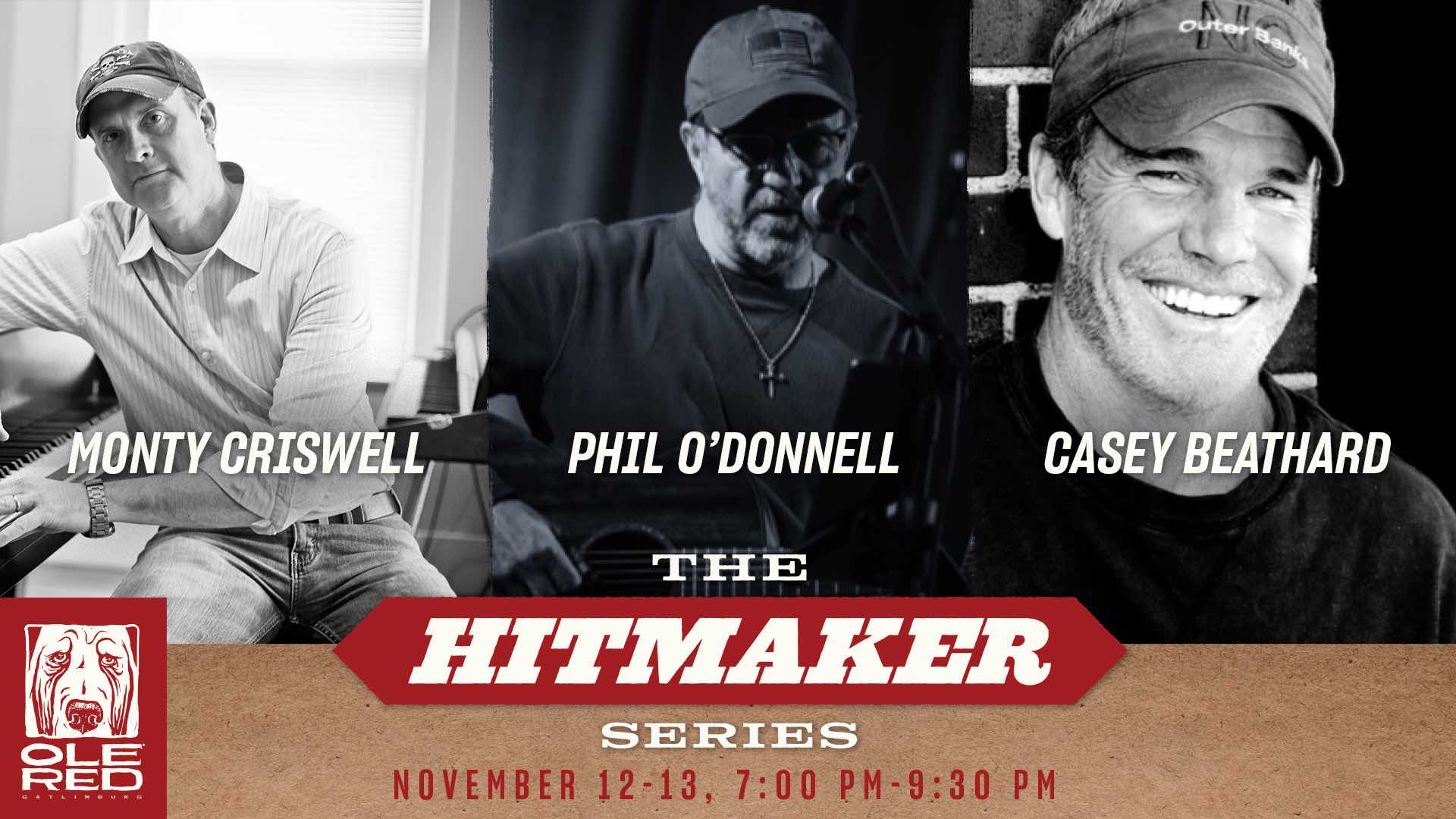 In 1993, after passing on an acceptance to law school at Syracuse University, Monty signed to Ronnie Milsap’s publishing company Milsap/Galbraith. In the summer of 1995, Monty became part of the songwriting roster at Hamstein Music Group, writing for them for five years. With Hamstein, Monty had cuts by such artists as Mark Wills, John Michael Montgomery, Mindy McCready, Rhett Akins, Tracy Lawrence, Ricky Van Shelton, Sammy Kershaw, Andy Griggs and David Ball. During his tenure at Hamstein, Monty also co-wrote Daddy Whipped the Devil with the Bible Belt, a #1 Gospel hit for artist Ken Holloway.

In April of 2000, four-time BMI writer of the year, Tom Shapiro, signed Monty to Wenonga Music, a co-venture with Sony ATV/Tree. While writing for Shapiro and Sony, Monty had songs recorded by artists such as Josh Turner, Neal McCoy, Tanya Tucker, Chris Cagle, Jamie O’Neal, Hal Ketchum, Gene Watson, Erika Jo, Blaine Larsen, Trace Adkins, James Otto and Gretchen Wilson. Monty also had a hit with his fourth Mark Wills cut Loving Every Minute which received a BMI award for being one of the fifty most performed country songs of 2002.

During his tenure at Wenonga/Sony, Monty was elected to and served a two- year term on the Nashville Board of the American Federation of Television and Radio Artists.

In 2005, Monty signed with Scott Hendricks’s publishing company Big Tractor Music. While at Big Tractor, Monty had cuts by such artists as Jeff Bates, Mark Wills, Chris Young, Chris Cagle, Gene Watson, Laura Bryna, Gretchen Wilson, James Wesley, Craig Morgan, Trace Adkins, Darius Rucker, Bucky Covington and George Strait. Monty’s Craig Morgan song Tough was a top ten record at Country radio in 2007 and received a BMI award in 2008 as well as a BMI Million-Air award. His George Strait record, I Saw God Today, debuted at #19 on R&R and became Strait’s 56thnumber one, the most by any artist in any genre of music. I Saw God Today was a two-week number one in the spring of 2008 in both Billboard and R&R magazine and was nominated for CMA and ACM Song of The Year, winning the CMA single of the year award. I Saw God Today also received a Grammy nomination for Country Song of The Year as well as a Dove nomination for Country Recorded Song of The Year and was voted one of NSAI‘s “Top Ten Songs I Wish I‘d Written.” Additionally, I Saw God Today has received a BMI Award and a BMI Million Air Award. Monty had the leadoff single Muddy Water, for the Trace Adkins CD X: Ten which also includes Monty’s song Hauling One Thing, his sixth of double-digit Trace Adkins cuts.

While at Big Tractor, Monty received his first job as a producer recording the sophomore album for signed Canadian Artist Melanie Morgan. The album debuted in Canada in 2010.

Monty was signed to Sony ATV Tree in the summer of 2009 and wrote for Sony for the next eight years. Cuts while at Sony include John Rich, Kristen Kelly, Frankie Ballard, Josh Turner, Kenny Chesney (duet with Willie Nelson), Rodney Atkins, Jake Owen, Love and Theft, Daryle Singletary, Mark Chestnutt, Scotty McCreery, Jackie Lee, Justin Moore (duet with Brantley Gilbert), Drake White, Morgan Wallen, Drew Baldridge, Jon Langston, Morgan Wallen, George Strait and multiple cuts on Joe Nichols, Michael Ray, Darius Rucker, Chris Young, Craig Morgan, Eric Church and Trace Adkins including the Trace single Just Fishin’ for which Monty received his second Grammy nomination for Country Song of The Year. Just Fishin’ was a Billboard top ten record in the Fall of 2011 and received both a BMI Award and a BMI Million Air Award in 2012. Just Fishin’ also received a Song of The Year nod from the American Country Music Awards and was named one of NSAI’s “Top Ten Songs I Wish I’d Written.” His Top Ten Eric Church single Like Jesus Does from the triple platinum Chief album also received the same award from NSAI as well as a BMI award in 2014 and has been certified platinum by the RIAA for single sales. In the winter of 2014, Monty had the Christmas single off the first ever Darius Rucker Christmas album. The single is entitled What God Wants For Christmas. In 2015, he was a writer on the Joe Nichols single Freaks Like Me and in 2016 had the Trace Adkins single Lit. In 2017, Monty had singles on XM Highway Find artist Adam Doleac (“Whiskey’s Fine”, “Some Girls”), Drake White (“Makin’ Me Look Good Again”) and the hit “Five More Minutes” by Scotty McCreery.

Monty has been a full-time professional songwriter in Nashville for 25 years. To date, he’s had over 200 cuts, numerous BMI awards and gold and platinum certifications. He is both a CMA and NARAS member.

PHIL O’DONNELL
Phil O’Donnell, a Canada native, made his first trip to Nashville in 1983 and began developing his skills as a songwriter.  Officially making the move in 1994, O’Donnell has also worked as a musician, playing guitar with many artists including Craig Morgan, Jeff Carson, Kevin Denney, Johnny Lee, and Sherrie Austin.

O’Donnell has also served as a producer for all of Craig Morgan’s hits, from “Almost Home” to 5-week number 1 “That’s What I Love About Sunday, “Red Neck Yacht Club” and “Bonfire”.

In 2015, O’Donnell won Canadian song writer of the year along with Buddy Owen & Gord Bamford for “Where A Farm Used to Be”.

CASEY BEATHARD
After making the decision of choosing music over “the family business” of football, Casey Beathard moved to Nashville to begin his career. He began as a demo singer and went on to become a recording artist on Capitol Records for a short time before he chose to concentrate strictly on songwriting. Beathard has now written over 20 top ten singles, including eight # 1 records, for Kenny Chesney, George Strait, Tim McGraw, Eric Church, Trace Adkins, Rodney Atkins, Leanne Wommack, Tracy Lawrence, Tracy Byrd, Chris Stapleton, Garth Brooks, Billy Ray Cyrus, Billy Currington and more. He has also received many accolades throughout the years including BMI’s Songwriter of the Year in 2004 and 2008, NSAI’s Songwriter of the Songwriter of the Year in 2008, two Grammy nominations and an ACM Song of The Year nomination for “Don’t Blink.”

ALL HOURS SUBJECT TO CHANGE