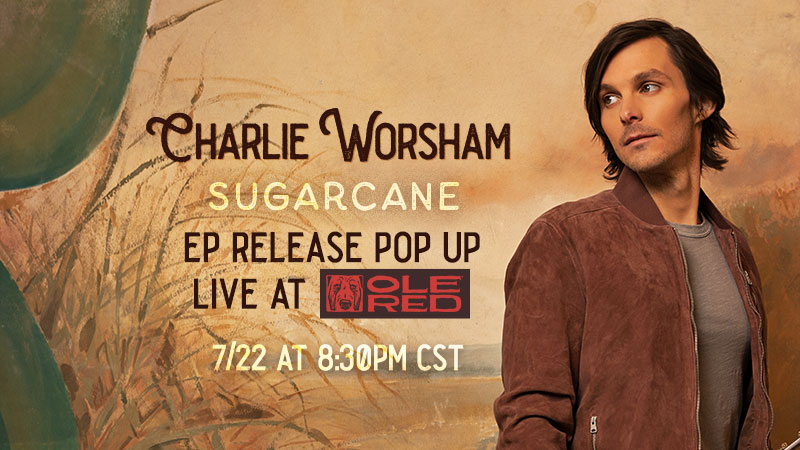 Of the event, Worsham shares, “Some of my favorite memories made on stage happened from the Ryman to the Ernest Tubb Record Shop on Lower Broadway. It feels like a fun, full circle moment to hop on stage at Ole Red Nashville and rock the songs from Sugarcane with my band for a crowd of folks who came to town to hear live country music.”

Produced by Grammy Award-winning producer Jay Joyce (Eric Church, Miranda Lambert, Little Big Town), Sugarcane is an emotional homecoming for Worsham. What began as personal reflections from a daily writing exercise, grew into something much more universal—six new songs that celebrate the love, perseverance, struggle and joy experienced through life and the people who are there through it all.

Ahead of the release, Worsham has unveiled three tracks: “Believe In Love,” “Half Drunk” and “Fist Though This Town,” of which Billboard declares, “compelling from the first note,” while Music Row praises, “Super powerful…the hard-times lyric and its blue-collar attitude grab you by your coat lapels and command you to pay heed. Brilliance all around.”

The new music follows Worsham’s 2017 album, Beginning of Things, and furthers his reputation as an artist with “undeniable musical talent” (NPR Music). Released to overwhelming critical acclaim, Beginning of Things landed on several “Best of 2017” lists including Rolling Stone, Variety, PopMatters, Nashville Scene and Vulture, who praised, “a multifaceted talent—a warm, thinking singer, hook writer, and picker—and one of the most well-regarded underdogs in Nashville.” Moreover, The Wall Street Journal proclaimed, “arguably the most blatantly talented multi-threat younger man in country music…a fiery guitar picker; a rangy, affecting song interpreter as a vocalist; and a witty yet compassionate collaborating songwriter” and American Songwriter declared, “one of country’s most formidable dark horses, a quiet contender worthy of the attention and airplay claimed by his less cerebral contemporaries.”

Since the release of his 2013 debut, Rubberband, Worsham has established himself as one of Nashville’s most beloved and well-respected artists. In addition to his own music, he’s a frequent collaborator including work with Dierks Bentley, Eric Church, Brandy Clark, Luke Combs, Vince Gill, Kacey Musgraves, Marty Stuart, Carrie Underwood and Keith Urban among several others. He also earned a nomination for Specialty Instrument Player of the Year at the 55th ACM Awards and has toured extensively across the world including numerous shows performing as of part of Old Crow Medicine Show as well as dates with Miranda Lambert, Little Big Town, Kenny Rogers, Lee Ann Womack, Tim McGraw and Faith Hill.