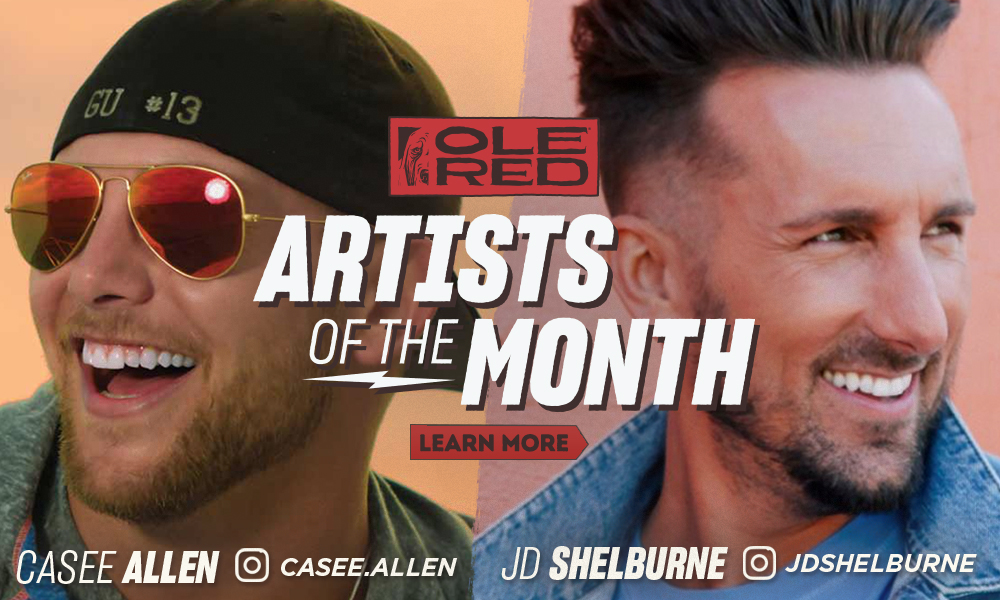 Check out the Ole Red Nashville Artists of the Month as we feature our top bands and artists who are playing the Main Stage at Ole Red. Each month we feature two new artists to share with our guests as they create their journey into the Nashville music scene.

JD Shelburne
In the last few years, JD Shelburne has become one of Kentucky’s fastest rising stars, with album credits, countless shows, a loyal fan base, charity work that has raised thousands of dollars and a list full of accolades that sets Shelburne apart from the rest. Country Artist JD Shelburne grew up on a tobacco farm in Taylorsville, KY, a tiny town southeast of the Ohio River near Louisville KY. At age 19, he found a guitar after the death of his grandmother and began learning to play and sing on his own. By his sophomore year of college, he had found a few gigs at some local bars in the Louisville/Lexington, KY area and developed a fan-base that eventually landed him on some of the biggest stages in the business, opening for some of the nation’s hottest stars.

Casee Allen
Despite growing up in the small country town of Coshocton, Ohio, Allen carries an eclectic variety of musical influences but truly has his family’s musical history to thank for his uniquely edgy, country infused sound. After opening for Kip Moore, the chart-topping Country rocker gave Allen the advice to move to Nashville and Allen did exactly that the very next day. 1 day after arriving in Music City, Allen had already scored his very first full-time gig on Broadway, performing 6-7 nights a week where he continues to captivate audiences across the country with his high energy performance and charismatic spirit.

Catch JD and Casee at Ole Red Nashville on your next visit!